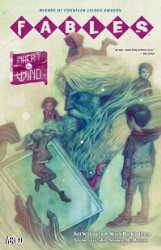 Publisher's Summary:  The tights and capes have been stored away forever, but where do the Fables go from here? Bigby and Snow White’s cubs try to move forward after learning a hard lesson about life and death in this collection featuring issues #108-113 of the acclaimed series.

Acquired: Purchased a new copy from an online store.

The main story being told in this issue is the titular story in which an heir to the North Wind must be found.  This becomes the beginning of a new story arc that will carry over now in which the cubs will feature more as main characters.  Throughout this story there are also various sideline stories as well: one of major note follows Bufkin in the new land of Oz carrying over from last volume and is proving interesting.  Also of smaller note both Rose Red and Miss Sprat have their own storyline as well.  This arc leads us to many new beginnings (since much was wrapped up last volume).  Not a lot really happens though, not much excitement or reveals but storywise things are being set up for the new story arcs.  After this main portion of the book we are treated to two smaller stories.  The first is a Christmas issue which takes Rose Red out in search of finding Hope in a cross of Dickens' A Christmas Carol and The Cricket on the Hearth.  Finally, the end section is a series of small vignettes which tell tales from "In those days" back to the times before or during the rule of the Adversary.  Most of these have nothing to do with the overall story arc, but they do tell interesting little tidbits of background information and there are a couple which hint at what is in store for a couple of characters further down the line.  Overall a passable issue, but nothing really happens, except for finding the heir to North Wind, as this is otherwise a set-up issue for the new paths the story will be taking.
Labels: 2012 fairy tales fantasy graphic novel