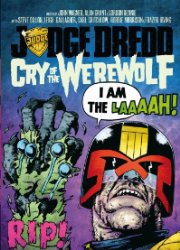 First sentence: "Creep was walking around with a sawn-off stump gun."

Publisher's Summary: "Mega-City One – a vast urban nightmare built upon the post-apocalyptic ashes of North America’s east coast. Beneath her lies the ‘Undercity’ – ruined remains of what was once known as New York City. Now it is a deadly environment where only the most ruthless creatures can hope to survive. One such creature – a flesh-eating werewolf, has managed to find its’ way out into Mega-City One, so Judge Dredd must go down into the Undercity to investigate, ensuring that no others can make their way to the surface. Plus three other Dredd-verse werewolf stories."

Reason for Reading: I love the Judge Dredd universe!

While the title may have you thinking differently, this book has no paranormal activity until the very last one-off story.  The book begins with the titular story from the '80s which is 7 parts long and almost half the book in length. "Werewolves" have found their way into Mega-City from the Undercity, their existence is based upon science, chemicals to be exact.  I loved this story, very well done and written by Wagner & Grant. The book is published in b/w up to this point.  Then we jump ahead to the 2000s for a direct sequel to this story.   From here the art in the book is full colour.  I also loved this sequel written by Wagner but I found the art very strange.  Even though the publisher's summary tells us 3 other werewolf stories are included, these two which make up half the book are the only true "werewolf" stories.

The rest of the book contains two somewhat thematically related one-offs.  First is a story set in the Cursed Earth which features bounty hunters who are mutants descended from Navajo spiritwalkers and are permanently in humanoid dog form.  This introduces (to me) a great female character named Quadrille, I hope she shows up again.  Finally, is "Asylum" which involves the Psi-Division and a paranormal creature, a vampire. This is the first time I've met up with Psi Judge Karyn but I liked her and I found the story creepy but unexpected when the theme is supposed to be werewolves.  A good collection of some of the stranger tales one can find within the Dredd universe.  I prefer the proper crime stuff myself but am not against the weirder storylines at all.  Good book for the Halloween season.
Labels: 1983 2001 2002 2010 2012 crime graphic novel paranormal post-apocalypse science fiction