256. The Unwanteds by Lisa McMann 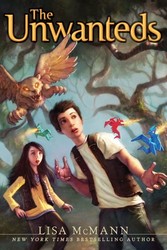 
First sentence: "There was a hint of wind coming over the top of the stone walls and through the barbed-wire sky on the day Alexander Stowe was to be Purged."

Publisher's Summary:  "Every year in Quill, thirteen-year-olds are sorted into categories: the strong, intelligent Wanteds go to university, and the artistic Unwanteds are sent to their deaths

Thirteen-year-old Alex tries his hardest to be stoic when his fate is announced as Unwanted, even while leaving behind his twin, Aaron, a Wanted. Upon arrival at the destination where he expected to be eliminated, however, Alex discovers a stunning secret--behind the mirage of the "death farm" there is instead a place called Artime.

In Artime, each child is taught to cultivate their creative abilities and learn how to use them magically, weaving spells through paintbrushes and musical instruments. Everything Alex has ever known changes before his eyes, and it's a wondrous transformation.

But it's a rare, unique occurrence for twins to be separated between Wanted and Unwanted, and as Alex and Aaron's bond stretches across their separation, a threat arises for the survival of Artime that will pit brother against brother in an ultimate, magical battle."

Reason for Reading:  I am a fan of the author and basically catching up with her books.

This was a pleasure to read and a book that every once and a while gave me little ripples of pleasure coursing through me body to read such a fine example of middle grade fantasy.  I hate to use this comparison but it highly holds up to the "Harry Potter" model.  Here there isn't a boarding school as such, but the children (13yos) are sent to live in a large magical building where they attend school learning magic, have strange instructors, are surrounded by large magical creatures and this is their new home.  This live-in school atmosphere has traditionally been a successful formula for books aimed at this age group and with the addition of magic it becomes quite beguiling.  I simply adored the set-up for this story.  It is being described as dystopian in some circles however that I do disagree with, as there is no evidence this is our world, in fact it quite seems to be an alternate world but as in the dystopia fashion an event has happened to change to structure of society leaving it miserable and under the total control of one self-appointed leader.

McMann is a wonderful writer and at this point I just don't think I wouldn't enjoy one of her books, even though they do sometimes rate a 4 with me.  The characters are engaging and inviting, leading you to connect with them right away.  The magic is fun but must be learnt as it is a skill.  The leader of the land of magic, Artime, is charismatic but often shows glimpses of sadness leaving the reader with a sense that he has a secret that will eventually come to life.  A pleasure to read, though I will say there were some spots where the plot seemed to drag for a while and as much as I enjoyed it I wouldn't call it a page-turning.  However I have book 2 in the tbr pile and will be reading it in the near future, before her new book comes out.