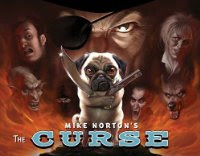 The Curse by Mike Norton (US) - (Canada)

Publisher's Summary: "In 2009, cartoonist extraordinaire and internet sensation Mike Norton (Battlepug, Double Feature Comics: The Answer) took the "24-Hour Comic" Challenge and created the pug-tastic comic The Curse over the course of a single day! He returned with sequels spawned during "24-Hour Comic" events in 2010 and 2011. Now all three tales of pirates and pugs are available in print in this new collection."

Acquired: Received an egalley from the publisher, through NetGalley

Reason for Reading: It sounded funny.

The first page (pg. 3) which has three speech bubbles has five vulgar words and at this point I was wondering what I was reading.  By page six I'd read so much profanity I was disgusted and about to close the book for good but then came page seven.  I have got to admit that when the pirate jumped out from the bushes and attacked the jerk boyfriend biting him on the arm and running away, I found this highly amusing and unexpected that I had to keep reading.  Once I'd finished the first of three stories, it seemed pointless to stop reading an 80 page book now that I'd got this far.  The second story was highly amusing with David Bowie's Labyrinth character as the main antagonist.  I giggled when he was referred to as "Kajagoogoo" and "the chick from Duran Duran".  Third story didn't do much for me.  So, yeah, this was rather hilarious in parts but the language was most foul indeed and I'd never read anything by this author again.  The publisher's recommended age is for teens but I'd never let any teen of mine read it unless I was OK with them talking like a hardened gang member.   Honestly, there is absolutely no reason for the continuous vile language used in this book.  Not very impressed, though I admit the humour tickled my funny bone.
Labels: 2012 graphic novel horror humour