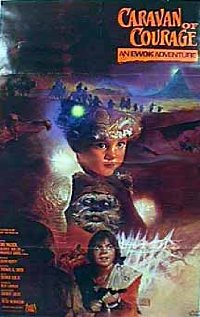 After watching the sequel to this, which we own at home, we thought we would try ILL and see if we could come up with the first original made for TV movie since it too had received an Emmy.  This movie however we found rather tiresome.  After the initial sequences in which the children are separated from the parents and we get to see some huge special effects creatures, the movie really slows down.  The brother's character really bothered me.  He doesn't trust the Ewoks at first, calls them names, then suddenly he's ok with them, but he continues to have an attitude the entire film.  Cindel's main purpose seems to be to stand around and look pathetic.  Which she is very good at doing.  Anyway nothing of significance happens as they look for their parents except a few comic moments with the Ewoks, until the big scene at the end where everyone is reunited.  Ds was bored with the movie and I was glad when it was over.  The sequel is much better.
Labels: 1984 movie reviews science fiction