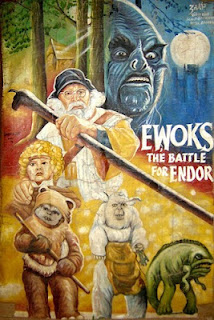 
This is a VHS transferred to DVD copy that I own.  The cover above is similar but not the same.  This was a sequel to Ewoks Adventures: Caravan of Courage, available at the above link as both movies are sold together as a set.  I remember watching these movies when they came on TV and they are especially aimed at children and those who just loved the adorable Ewoks after "Return of the Jedi" came out.  I always wanted an Ewok doll but never got one :-( This sequel starts off with the little girl being orphaned and taken under the wing of Wicket the Ewok, they meet the strange but adorable creature called Teek who has "sonic" speed as my son described it.  Of course there are bad guys after them, kind of a lord-of-the-rings-type of deal as far as the plot goes.  DS and I both enjoyed the movie very much.  The special effects are what you would expect from '80s TV (not the Star Wars movies) and that's why these movies get bad ratings.  There are some stop-animation Ray Harryhasuen-inspired creatures and action scenes that were fun to watch.  Aside from the little girl the main character actor in this film is Wilford Grimley and I used to love that man in anything.  Perhaps because I didn't have a grandfather growing up, he always seemed to me to be the quintessential Grampa.  I remember him in an old TV show from the '80s where he was the grandfather and from the Quaker Oats commercials.  This was a feel good movie for me.  Ds enjoyed because of all the action and yet it wasn't too scary for him.  He particularly liked Teek, whom he compared to his favourite video game character "Sonic".  This is a great '80s TV Movie and good family watching!