249. A Room Full of Bones by Elly Griffiths 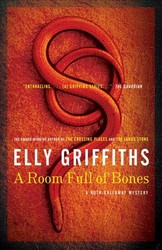 
First sentence: "The coffin is definitely a health and safety hazard."

Publisher's Summary:  "Set in Norfolk, England, embroils, once again, our brainy heroine in a crime tinged by occult forces. On Halloween night, the Smith Museum in King's Lynn is preparing for an unusual event — the opening of a coffin containing the bones of a medieval bishop. But when forensic archaeologist Ruth Galloway arrives to supervise, she finds the curator, Neil Topham, dead beside the coffin. Topham's death seems to be related to other uncanny incidents, including the arcane and suspect methods of a group called the Elginists, which aims to repatriate the museum's extensive collection of Aborigine skulls; the untimely demise of the museum's owner, Lord Smith; and the sudden illness of DCI Harry Nelson, who Ruth's friend Cathbad believes is lost in The Dreaming — a hallucinogenic state central to some Indigenous Australian beliefs. Tensions build as Nelson's life hangs in the balance. Something must be done to set matters right and lift Nelson out of the clutches of death, but will Ruth be able to muster herself out of a state of guilt and foreboding in order to do what she does best?"

I loved the fourth entry in the Ruth Galloway mystery series.  Elly Griffiths has managed to combine the unrelated but unique topics of Australian Aborigines and horse racing to create a fascinating murder mystery which is directly related to the main character's profession of forensic archaeology.  Griffiths keeps the reader on her toes, sending us down quite a few rabbit trails so we never know who to trust in this story with  a wide pool of potential suspects, some very close to home for Ruth.  Not the usual serial killer story, but still more than one body, which is how I like my crime books, I thoroughly relished this plot.  There was a teeny bit of  'hocus-pocus' left unresolved, however, that I'd prefer not to have in a mystery, thus my 4 stars.

Ruth's private life takes leaps and bounds in this volume, moving along to another level.  I really like how Grifiths is moving her main character's lives along in this series unlike some others out there where they languish in an unresolved relationship for seven books.  No, Ruth and Nelson are both interesting characters whose lives are moving at the pace of real life people and they are just as entertaining as the mysteries in this series.  I didn't quite fancy "The House at Sea's End" but this is on par with books 1 & 2.  Looking forward to more from this series.