248. Leonardo da Vinci: The Life of a Genius by Atsuo Sugaya 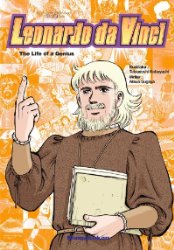 Leonardo da Vinci: The Life of a Genius by Atsuo Sugaya. Illustrated by Tatsuyoshi Kobayashi (US) - (Canada)
Biographical Comics


First sentence: "If you're going to be kept in a cage ... you may as well drink poison and die!""

Publisher's Summary:  "Creator of the world-famous painting the Mona Lisa, Leonardo da Vinci is widely considered the greatest genius of all time, his knowledge and ingenuity extending far beyond the field of art. A scientist and inventor, he experimented with flight, studied the human anatomy, and conducted military expeditions. However, some details of his life are less well known. As an artist, he completed only a few works of art, including The Last Supper, and many of his inventions never came to fruition. In his personal writing, he often employed "mirror writing," writing in reverse from right to left. He traveled extensively and died in France more than 500 years ago, leaving many mysteries about his life behind. In this Biographical Comic, we will explore these mysteries, his thoughts on his creations, and the influence of his mother."

One of the better biographies I've seen done for kids in the graphic format, never mind in manga!  Divided into chapters and presented in American format (front to back) this reads as a normal book but has the distinct manga presentation in its artwork and style.  At 144 pages long plenty of space is given to tell a fairly detailed story of da Vinci's life at this level quickly moving up to his young manhood and onwards.  Pictures of his actual work are included as are those of contemporaries.  The book concentrates more on what inspired Leonardo, what compelled him, how he learnt, where his methods came from than his actual time spent painting his masterpieces.  There is also a map and a timeline included for reference.  The artwork is enjoyable and the story is highly entertaining, which should cause young readers who find these topics of interest to further explore the man and work.  An impressive little book that makes me want to check out the others in this series.