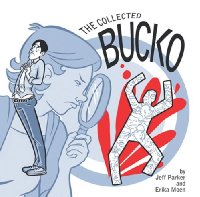 The Collected Bucko by Jeff Parker. Art by Erika Moen. Forward by Steve Lieber. (US) - (Canada)

First sentence: "Hey--didn't you need to get up?"

Publisher's Summary:  "After discovering a dead body in an office bathroom, hungover job interviewee Rich “Bucko” Richardson becomes suspected of the murder. What he thinks is a quest to find the real killer turns into a weeklong romp through the wilds of Portland, Oregon, complete with bike-mounted cover bands, steampunk Makers, Juggalos, SuicideGirls, meth heads, so much absinthe, and an entire city made of books. After taking the Internet by storm, Jeff Parker and Erika Moen’s dirty, funny murder mystery is now the most hilarious book in comic shops!

*Includes brand-new strips, commentary, and info on the real-life inspirations for Bucko!

Acquired: Received an egalley from the publisher through NetGalley.

Reason for Reading:  I just couldn't pass up the dead guy in the bathroom plot even though I was a little leary that the book might be beyond my tastes of decorum.

For me, this is one of those books that I was surprised to have enjoyed so much and also somewhat embarrased as it is not my typical fare and *not* what I would recommend to my regular readers who know that I point out issues one may have with a book's moral/indecent attributes.  Well, let me say, this is the first book, I've ever reviewed that I've felt necessary to lable *adult*.  Now don't get me wrong, it's not really like *that*.  It's all innuendo and talk.  There is bad language; it is irreverent and well just plain downright dirty in parts, nothing graphic mind you.  But it is absolutely hilarious and I didn't find myself offended at all.  These people were just so waaay out of my realm of experience I couldn't relate to them as real people but they were downright quirky and I know such types *do* exist in the world.  I was chuckling and really had a ball.  A little uncomfortable at first, but the two main characters Rich (Bucko) Richardson and Gyp(sy) are adorable and so genuine I fell for them right away no matter how misguided they were.

This book will not be for everyone and probably not for my usual blog readers but those of you who are here for my graphic novel and quirky book reviews will certainly appreciate this.  While this is a print edition of a webcomic, it includes major bonus material for the fan.  There is an introduction by Steve Lieber and one by Parker and Moen.  There is also a running commentary at the bottom of most pages by the author/illustrator.  Then there is a bonus comic on the Jugalette's story of her life and a look at the process of how a page was made; finally ending with a photo gallery.

A hilarious romp, on the wild-side, but not beyond acceptable to my tastes, even though I was a little shocked here and there.  Let's say I spent quite a bit of time looking up definitions of words I hadn't a clue about and got quite an education on how the "other side" lives.  Really hilarious though.  Loved it!
Labels: 2011 2012 adult graphic novel humour