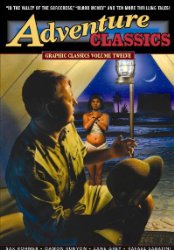 
First sentence: "Conor wrote to me three times before the end from the camp at Deir-el-Bahari..."

Adventure Classics didn't turn out to be one of my favourite volumes in this series but still it is an exciting read and a fantastic collection of obscure tales from classic authors of the past.  The theme is a bit vague here.  What exactly is an "adventure"?  Easily enough to define, we have the stories of pirates, the wild west, the arctic gold rush, and tales of war but a few others are on the fence as to whether they are "adventures" or not: magic in the desert, love in the jungle, a haunted house story.  Nevertheless, a unique blend of stories provides an interesting mix of styles and some stand out more than others.  The piece de resistance for me was to see one of my favourite poems done in the graphic format "The Shooting of Dan McGrew".  While I'd heard of most of the authors represented here I'll have to say other than "Gunga Din", another all-time favourite poem, all the other titles were new to me, which was refreshing.  My favourite stories were E. Nesbit's "The Mystery of the Semi-Detached", McCulley's "Stolen Story" and Runyan's "Two Men Named Collins".  Usually I find several I don't get or like but this time there is only Fitz-James O'Brien's "The Man Without a Shadow" which is so short and then drawn in a humorous style that I'm not sure I get it beyond a farce.  I enjoyed all the other re-tellings, though wishing they hadn't left out some middle verses of "Gunga Din".  And was visually pleased with all the art except J.B. Bonivert's illustration of "Valley of the Sorceress".  I believe I've not appreciated his work before.  Here, all his characters have muscular male bodies, with manly stances, including the women, who are drawn the same way with breasts and are rather disconcerting.  Reading this book has done two things for me. 1) I've read a few of E.Nesbit's ghost stories; now I'd love to find and read a collection of them. 2) I'd like to re-watch {again} one of my all-time favourite movies ever "Gunga Din" with Cary Grant.
Labels: 2005 graphic novel short stories