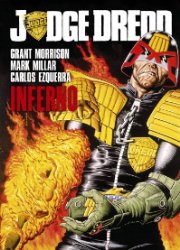 Publisher's Summary: "Ex-Judge Grice was sent to the penal colony on Titan for attempting to stop democratic reform in Mega-City One. Driven to insanity and aching for revenge on Judge Dredd who he blames for his downfall, Grice and an army of renegade prisoners have taken control and are preparing to unleash hell on the ‘Big Meg’ with the help of a deadly virus!"

Reason for Reading: I love the Judge Dredd universe and I've heard of Titan mentioned in previous stories so this was fairly exciting to take a look at a story set on the planetary penal colony for criminal judges.

The book consists in total of four stories.  First of all come two back to back sequential stories which take up 90% of the book.  "Purgatory" shows us life on Titan for all those there, both the convicts and the guards, under the sadistic rule of Governor Khurtz.  Judge Grice and his followers have just recently been sent to the colony for trying to kill Judge Dredd and it would seem that is a common crime amongst the inmates.  We learn that  not only are the prisoners abused and maltreated but are also being experimented on for scientific experiments and Khurtz's personal enjoyment.  Titan is in possession of two mighty weapons that could wipe out the population of earth and this causes a riot between the inmates and the guards which leads us to the titular story "Inferno".  Here the prisoners have taken over the asylum with Grice as their leader.  They take the weapon and head straight to Mega-City One to take it out and take over what will be left of it.  This storyline ends up nicely, though brutal.  The Dredd that we experience hear is one of no regrets, one out to get the bad guy no matter what, all means will justify the end.  Almost every page of this story is brutal violence as we see mankind at his most base sinful nature.  A gripping story with some mentions of past events that are intriguing and make me want to catch up on all the storylines in between I've missed out on.

The last two stories are very short, one-off episodes.  I've already read a Judge Dredd Christmas story and this book includes another called "I Hate Christmas".  A few pages of Dredd working on Christmas eve showing exactly why Dredd has every reason to hate the season.  Finally "Top Gun" is presented as a one-off where Dredd meets one of the tech guys who suits him up with some new gear, a new gun and bike supposedly with the latest, greatest upgrades.  Off to settle down a cube breakout, Dredd's new gear malfunctions and in the end he dispatches "Joe Dredd justice" to all those who deserve it. Again these stories are violent and brutal but these two have some dry humour to lighten things.