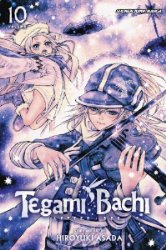 Publisher's Summary: "With Lag out sick, Aria Link, second in command at the Beehive, takes over the job of delivering his letters. But even with Niche at her side, Aria finds that Amberground has become a dangerous place. Can she defend herself armed with nothing but a violin? Meanwhile, Lag’s illness takes a strange turn..."

Wow! When we get to Vol. 10 in a series it's nice to expect a little something special and, Man!, does this volume deliver.  Plotwise, the publisher's summary does not let you know what you are in for with this volume.  Several threads that have been ongoing since early days in this series have major reveals; we finally learn the truth about something that has been a small, yet significant storyline.  It's just one thing after another.  Can't say much more without giving anything away... Character-wise, Lag is in the background this time and we delve into Aria's character, learning what she is truly like for the first time and getting her full (surprising) backstory.  A knock your socks off volume!
Labels: 2012 fantasy manga YA