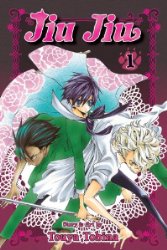 
First sentence: "No one needs you." That's what I've been told."


Publisher's Summary: "Born into a family of “Hunters,” Takamichi's destiny is to pursue and slay demons. When her twin brother is killed, she is saved from despair by a pair of Jiu Jiu—shape-shifting familiars—in the form of two wolf pups named Snow and Night. Now Takamichi is in high school and an active Hunter. Snow and Night can't wait to attend school in their human form to "protect" her. But are they ready to go off leash...?
Takamichi's Jiu Jiu Obedience Training Goals

1. Stop them from following you to work

2. Avoid exposing them to the full moon

3. Save them from execution "

Reason for Reading: I've finished a couple of manga series lately and am looking for a new one to start.

I liked the idea of this series being about a female "Hunter" who pursues and slays demons and the pair of wolf cub shapeshifters she's given as her familiars to protect her.  Unfortunately this is not how it read for me. Takamichi is a spoiled, rude, obnoxious girl who gets what she wants except for having the wolf pups dumped off on her.  So she treats them cruelly, with disdain and no show of affection at all.  She has a wounded ego and a sad past she cannot get over.  The book mostly revolved around her being rude and mean to the pups while they slobbered and worshiped all over her.  This could have been cute had they been tiny little pups, but no they were 3 years old and when transformed to adult form they were the same age as Takamichi herself, naked, and inevitably found in bed with her all snuggled up.  There is no s*x in the book but these images have been drawn for their sensuality, Two n*ked men and a girl in bed?  And later on there is a scene with one of them on top of her saying he wants her. (Is it innocent? We never find out as they are interrupted)  So no demons, I guess that's waiting for the second volume and while volume 1 allows us an introduction to the characters; I found them all off-putting and would say this is not my type of Manga or story-line.
Labels: 2012 humour manga paranormal YA