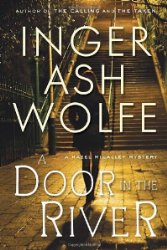 A Door in the River by Inger Ash Wolfe (US) - (Canada)
Hazel Micallef, Book 3


First sentence: "She needed to get to the road."

Publisher's Summary: "When Henry Weist, Port Dundas, Ontario's likeable hardware store owner is found dead in the parking lot of a cigarette shop on a local First Nation reserve, apparently of a bee sting, and with more deaths to follow, Hazel Micallef finds herself involved in one of the most sensational and shocking cases of her career. And one that literally goes underground to get to the bottom of what turns out to be a vengeful, murderous rampage. Behind the scenes of the investigation, Hazel is dealing with an 87-year-old mother who seems to have lost the will to live; the complications of procedures and protocols, political manoeuvrings within the force itself, including the promotion of her former nemesis to whom she will now report."

I wasn't quite as blown away with this third entry into the Hazel Micallef mystery series as I was with the first two but I still thoroughly enjoyed this well-paced exciting thriller with a unique plot.  The author manages to tell a story set upon a First Nations reserve with a few First Nations characters, even involving some issues of contention such as the sale of cheap cigarettes on reserves, without ever turning the story into one about race or race relations; in fact, the setting has nothing to do with the plot.  I was highly impressed with this.  The actual type of crime involved here is a secret which isn't let out until halfway through the book so I won't mention it but it is a very intriguing premise, especially the way that the author leads us up to it starting off with the violent murders of men, then an attack on one of their wives.  I really enjoyed the mystery story here and found the dark, realistic ending true to life.  I also absolutely delighted in the continuation of Hazel's relationship with her aging mother, plus the inside political story of the amalgamation of police forces into one big super-station which Hazel, is of course, against and leaves her now under the direct command of her former subordinate and nemesis.  These plot points should carry over to the next book well.

PS: The real "Inger Ashe Wolfe" has finally 'fessed-up; Michael Redhill, wrote an articles on his subterfuge, but the whole thing is rather disappointing since I've never heard of him.  Why use a pseudonym when only a unique clique knows who you are?  Ah well, at least he plans on continuing as "Inger" for a while longer yet!
Labels: 2012 Canadian author mystery thriller