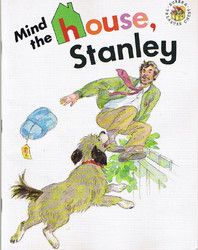 Acquired: I've had this so long, I no longer remember.

Reason for Reading: Ds read aloud to me as his reader.

The Eureka Treasure Chest reading series was an Australian reader series published by Longmans and republished in Canada by Addison-Wesley.  I used to have many of the books and used them along with a phonics program to teach my eldest son to read.  I could wax poetic about the series but I only have this one book now, which isn't exactly a prime example of the type of book found in the series but is well enough.  The book contains two easy to read stories with plenty of text about poor misunderstood pet dog Stanley.  In the first one, Mum goes off shopping and tells him to mind the house as he lays sleeping by the front door.  He spends the morning chasing cats, birds, various delivery men, etc. off the property and just as he lays down by the door mum comes home and calls him a lazy dog for laying there all morning.  In the second story, Dad sends Stanley out of the house for laying on his coat and sleeping, again calling him a lazy dog.  Stanley goes out and finds an old bone, manages to climb aboard a meat pie truck, has an hilarious adventure in which a neighbour finds him and brings him home in his car.  To which dad returns to find him sleeping by the door, calling him a lazy dog again!  Then the book ends with a poem and a page of riddles.  This book was easy for ds to read and that is the point of the few books he is reading now.  Also working on trying to use some sort of expression in his voice.
Labels: 1987 children's books easy readers homeschool