218. This Dark Endeavour by Kenneth Oppel 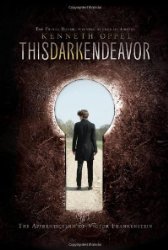 This Dark Endeavour by Kenneth Oppel  (US) - (Canada)
The Apprenticeship of Victor Frankenstein, Book 1

First sentence: "We found the monster on a rocky ledge high above the lake."

Publisher's Summary:  "Victor Frankenstein leads a charmed life. He and his twin brother, Konrad, and their beautiful cousin Elizabeth take lessons at home and spend their spare time fencing and horseback riding. Along with their friend Henry, they have explored all the hidden passageways and secret rooms of the palatial Frankenstein chateau. Except one.

The Dark Library contains ancient tomes written in strange languages, and filled with forbidden knowledge. Their father makes them promise never to visit the library again, but when Konrad becomes deathly ill, Victor knows he must find the book that contains the recipe for the legendary Elixir of Life.

The elixir needs only three ingredients. But impossible odds, dangerous alchemy and a bitter love triangle threaten their quest at every turn.

Reason for Reading: I read all the author's books.

This is Oppel's third series for Young Adults and each one has been so completely different from the other.  The only thing consistent between them is a dark atmosphere or plot.  This time Oppel has entered the Gothic world, set in Eastern Europe near the end of the French Revolution; it is never quite clear whether this is our earth or an alternate reality.  Everything feels true and real for this historical time period; it is only when Victor's potions of alchemy provide fantastical results that we enter into a world of magical realism.

I did find the book a bit slow to get into but once I caught the flow, I was hooked and found the book hard to put down.  There are four main characters and each has their own distinct personality.  Victor is not the most likable of the bunch but the book is told from his point of view and this reader found him the most genuine however unreliable he may be :-) I loved the whole Gothic atmosphere, the dark eerie tunnels, forests and sinister scientists.  The added magic of alchemy brings that touch of the supernatural to the events to provide an all around gripping story with fantastic plot, characters and atmosphere.  The ending wasn't surprising to this reader and yet it was still a shock as it was deftly written, coming out of when least expected and leaves all sorts of plot openings for the next volume which I am eager to read as it will have  been released by the time this review has been posted.