193. Dreams of Gold by Jonathan Chamberlain 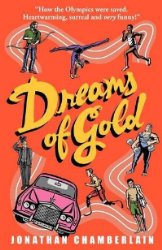 Dreams of Gold by Jonathan Chamberlain (US) - (Canada) - (Kindle)

First sentence: "The carp in the pool swirled in a sudden frenzy for the crumbs of dried bread that the man scattered over the surface."

Publisher's Summary: "Heart-warming, surreal and very, very funny.
How The London 2012 Olympics were saved from the bizarre schemes of a mad dictator
P.G.Wodehouse meets Tom Sharp with a dash of Spike Milligan.
Wales - the land of poets and sporting heroes . Rowan Jones, the up-and-coming Welsh poet, accidentally finds himself attracting a motley crew of disaffected athletes from all over the world to his eccentric farmhouse deep in the heart of Wales.
There's Jeremiah the Tennessee backwoodsman, Marguerite the French existentialist, Yoshi and Toshi, the Japanese identical twins, Leonardo the Italian hunk, Solomon, the Hassidic weight-lifter, and Mad Mike and Jade and Kono and Ayesha and all the rest of them....
And then there is the mad dictator, Osmanakhian.
And Perkins, the quintessential English butler, is not all he seems.
And what about Anna? Well, Anna is... Oh dear, it's much too complicated. I'm afraid, you'll just have to read this book to find out."

Acquired: Received an egalley from the author.

Reason for Reading: I don't usually read comedies but the book sounded quirky enough to pique my interest because I *do* like quirky.

This book read like a movie to me; one of those ensemble pieces like "Rat Race" except I imagined it more like something they just don't make anymore.  As I read, the book visualized in my mind as an old Monty Python or Carry On movie.  Not that the theme is old or anything, in fact it is quite modern.  There is a gender-bender theme running throughout (even though that is beyond my tastes) one can see just how quirky this story is.  Even though the book deals with some "R" rated themes and jokes it is not vulgar, not in the same way as Chuck Palahniuk or even Christopher Moore, at times.  I must say the book is quite funny but will not be to every one's tastes.  It is irreverent and was on the borderline for me.  Disregarding the theme already mentioned I found the characters, the farce and the plot, such as it is, highly amusing.  The topic of the London Olympics is very now and this will make a fun summer read for those who enjoy a British farce.
Labels: 2012 humour sports