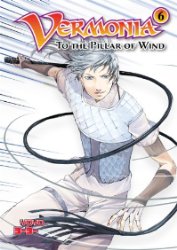 
In part six of the Vermonia series, the Blue Star Warriors must find a way to infiltrate Uro's most fiercely guarded headquarters as they fight to save the Pillar of Wind from destruction. They must use all of their resources, including the warship Vleste, now powered by the magical crystal they found in the Lake of Wishes. As Doug is captured by a band of Uro's soldiers, Naomi and Fly are inadvertently transported back to the planet of Blue Star- revealing the mysterious pathways connecting the galaxies while exposing some of Uro's weaknesses.

The future of Turtle Realm hangs in the balance as the epic manga series charges forward.

This volume really picked up for me.  I found I had a bit of trouble with the last two getting back into the story, but with this volume I quickly got up to par as I was thrown head first into the middle of the excitement.  The fight for the Pillar of Wind is on in this volume and all the tribes join together, so we have pretty much all characters we've met at this point popping in and out, some very briefly, others stay around longer.  The hunt is also on to find Mel and Satorin and the teen warriors are determined to find them before the ultimate battle with Uro.  So, in a nutshell, this volume has a lot of travelling to various places in their quests and is heavy on the action as they battle Uro's force of evil along the way.  The book also starts with the finishing up of the second half of Jim's memory dive into the history of how Uro became so evil in the first place.  An overall exciting and refreshing volume.
Labels: 2012 children fantasy manga YA