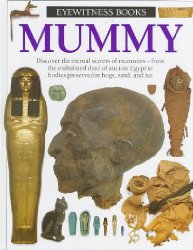 
First sentence: "Mummies are the preserved bodies of people or animals."

Publisher's Summary: "Photographed in full color. Unwrap hair-raising facts about natural and man-made mummies! Here is a look at how bodies were prepared, why ancient cultures made mummies, and how bog and ice mummies were preserved by freak climatic conditions."

Reason for Reading:  Ds has been studying Egypt for his homeschool history topic.

Really what can be said about an Eyewitness Book; I feel redundant just trying to review it.  If you are a parent then you already know about these awesome visual books profusely illustrated with museum and archival photographs along with an informative yet short text per two-page spread that is carried along with image subtexts.  This book in particular is an older edition and has been reprinted.  I have not seen the new edition but it has about 10 more pages and does include a clip-art CD (something we would not make much use of).  I do know these books now include Internet links but other than that I can not tell you the difference between the editions.  I'll pass on describing an Eyewitness Book as everyone already knows they are excellent, some a bit more than others.  This being in the top-end with a perfect five star rating for me.  The visuals are extremely fascinating, though parents should be forewarned that many are graphic in nature since there are images of mummified humans in various degrees of preservation, including children and babies.  My son was squeamish at first but got used to the mummies after a bit and became quite fascinated with them.  There were a couple we had to cover up because they were just too freaky for him.

The progression of this book is nicely laid out.  First it starts with natural mummies, those made by design, then those made by accident.  Then it moves on for the majority of the book onto Ancient Egypt and the various topics of mummies are covered extensively. Finally, the book ends with South American mummies, the Iceman, bog mummies, the mummies in the catacomb of Sicily and a final oddity of "other" mummies.  Highly engaging book.  Suitable also for teens and adult.  Would make the perfect coffee table book.  But be warned, this particular book is not for the squeamish.
Labels: 1993 children Egypt history non-fiction