31. The Coldest City by Antony Johnston 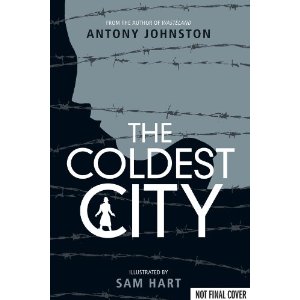 The Coldest City by Antony Johnston. Illustrated by Sam Hart. (Canada) - (US)


Acquired: Received an egalley from Oni Press through NetGalley.

Publisher's Summary:  "November 1989. Communism is collapsing, and soon the Berlin Wall will come down with it. But before that happens there is one last bit of cloak & dagger to attend to. Two weeks ago, an undercover MI6 officer was killed in Berlin. He was carrying information from a source in the East - a list that allegedly contains the name of every espionage agent working in Berlin, on all sides. No list was found on his body. Now Lorraine Broughton, an experienced spy with no pre-existing ties to Berlin, has been sent into this powderkeg of social unrest, counter-espionage, defections gone bad and secret assassinations to bring back the list and save the lives of the British agents whose identities reside on it."

An enjoyable spy thriller that takes place during the weeks that lead up to and follow the breaking of the Berlin Wall.  Told from a British point of view, this has all the makings for a good espionage tale.  MI6, CIA, KGB and East German agents all play a part.  The story is told backwards through a debriefing of a female agent who was sent to Berlin on a mission where she meets up with an old-timer misogynist agent who is none to happy to have her arrive.  Twists and turns move the plot to an unknown destination as the agents look for missing vital documents, we meet up with possible double agents, assassins and a shroud of doubt surrounding everything.  A final surprise twist ending brings a satisfying conclusion and fans of the genre will have a gripping read.

I'm on the fence about the artwork.  I appreciate that it is done in black and white as it suits the atmosphere and story well.  The large panels are well executed but I find I'm just not a fan of the artist's style which is very shadowy and indistinct.  Incredibly so, for the regular size panels, at times I had no idea what I was looking at.  This, of course, is a reflection on my taste in art, ymmv.  Though not to my tastes I do grant that it worked with the story it told.
Labels: 2012 graphic novel historical fiction thriller