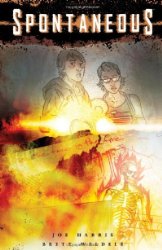 Spontaneous by Joe Harris. Art by Brett Weldele (US) - (Canada)


"Phenomenon, conspiracy or delusion? "Kelvin" Melvin Reyes was only three years old when Spontaneous Human Combustion took his father from him. He's since devoted his life to exploring the mystery behind the phenomenon, searching for a pattern and predictors that he might save others from that same fiery fate. But the closer he gets to his goal, the further things lead down a well of secrets, horrors and terrible truths. Is SHC real? And, if so, can it be stopped?"

Acquired: Received an egalley from the publisher.

Reason for Reading: Once upon a time when I was a wacky teenager, I was really into spontaneous human combustion and read lots of stuff about it.  Couldn't get over the creepy photographs!  I couldn't pass this one by.

This novel didn't really do too much for me.  It was ok, good ok. But that is all.  The artwork is not a style that impresses me much.  Simple sketching and pages done in monotones, with the colours changing to reflect the atmosphere, emotion of the scene being played out.  What bothered me the most was that the story couldn't seem to decide whether it was going to be paranormal or not.  So it hovered between having a rational explanation and going off on a paranormal twist which just didn't work for me.  I would have liked the story much better if the old guy's powers had been omitted, then it would have been a satisfactory combination of paranormal into the ordinary.  I'd pick this one up at the library for a quick read, unless maybe you collect SHC stuff.
Labels: 2012 crime graphic novel mystery paranormal YA