136. Yellow Submarine by The Beatles 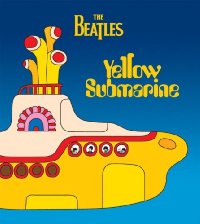 
First sentence: "Once upon a time or maybe twice there was an unearthly paradise called ... Pepperland."

Once upon a time (or maybe twice), some 80,000 leagues beneath the sea, there lay a colorful land of song and laughter called Pepperland, where Sergeant Pepper's Band was always playing your song--until the Blue Meanies burst on the scene and chased all the music and magic way. So began the classic 1968 film Yellow Submarine, inspired by a song and quickly hailed as a visionary masterpiece -- an avant-garde amalgam of Heinz Edelmann’s pop art, Beatles music, and groundbreaking animation techniques.

Now, just in time for an exciting new 3D version of the beloved film, comes a midi hardcover edition of YELLOW SUBMARINE, showcasing the film’s dazzling images and its lighthearted, witty tale in a glorious picture book to be savored by fans and readers of all ages."

Reason for Reading: I love The Beatles and couldn't resist this homage to the fantastic film and song "Yellow Submarine".

Well, what can I say.  If you loved the animated film you'll delight in this picture book.  The plot of the book is a very condensed version of the film's plot, keeping the main idea but leaving out many sideplots.  It *is* only 40 pages.  The book's main glory is in it's illustration taken from/based on that of the film.  I think parents/grandparents will be buying this one for the fun of reading it to their little ones who will certainly marvel at the illustrations and the fantastical world presented to them.  The main plot centres around ridding Pepperland of the Blue Meanies but the central idea in the book to vanquishing them revolves around the theme/song "All You Need is Love".  Grown ups will delight at the multitude of Beatles song titles thrown into the text such as: "Do we need a ticket to ride? asked George. "Only if we're taking the mystery tour," Ringo joked." and there is plenty of tongue in cheek Fab Four humour that adults will chuckle over such as "Frankenstein's a friend of yours?" Fred asked. "Oh, yeah.  I used to go out with his sister ... Phyllis."  A delightful picture book kids and adults will enjoy, both on different levels.
Labels: 2012 children fantasy music picture books