132. Behind Enemy Lines by Carol Matas 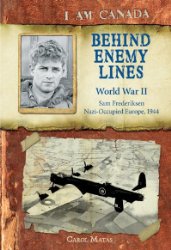 First sentence: "From my rear turret I got a glimpse of our attacker, a twin-engine Ju88, coming in for the kill."

Publisher's Summary: "Eighteen-year-old Sam Frederiksen has come a long way from the Prairies. Trained to be a gunner in a Lancaster bomber during WWII, he is shot down over France. Battered and bruised, he does survive, and joins forces with the French Resistance... only to be betrayed by one of its members. He and other flyers from various Allied countries are rounded up by the Gestapo and held in Fresnes prison just outside of Paris.

Treated as spies, rather — than POWs, these men are beaten, some tortured — then sent to Buchenwald Concentration Camp in eastern Germany. It is here, in these wretched conditions, that Sam witnesses the darkest side of humanity — gas chambers, torture and starvation. Yet it is also here that he comes to understand the true resilience and unfathomable courage of the victims…"

Reason for Reading: I'm reading every book in this series, I love WWII historical fiction and I've enjoyed other books by the author.

Another fantastic book in this series.  Scholastic.ca is keeping this series in top-form by (so far) only using well-known literary award-winning writers of children's literature.  By the list of authors included one can tell the quality of writing is going to be top-notch. Carol Matas writes various genres but she is most well known for her Holocaust historical fiction and this book can be added to the list.  I thoroughly enjoyed the story.

Though the topic was known to me, this is the story of 168 British Commonwealth Airmen who were captured by the Germans and sent to the death camp Buchenwald Concentration Camp and only days before their scheduled extermination were they then taken to a POW camp.  This is a powerful story, based on real life true events, though the characters included are fictional Matas holds no punches when describing the pure evilness behind Hitler and his vision and the atrocities carried out by those under his command, especially at the Concentration camps.  Graphic to a point but suitable for the mature 10+ age range without venturing into a YA book.  Though teens will enjoy the story as well.

I was familiar with this story but this series of books always manages to teach me something new in each and every single book.  I hadn't known about Canada's refusal to take in Jews during the war, nor about Denmark's extraordinarily brave response of non-compliance to the German occupiers.  Other smaller pieces of information were like new found trivia for me and I enjoyed the history learnt from this gripping, dark, horrendous story of what people are capable of doing to each other, but also of what people are capable of doing *for* each other and how some can rise to the occasion even under the most severe conditions.  A great boy's book!
Labels: 2012 Canadian author children's books historical fiction war WWII YA