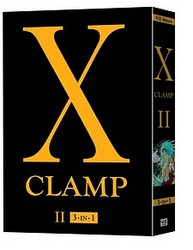 Publisher's Summary: "Hinoto, Japan's greatest seer, has foretold the end of the world. At the center of her prophecy is a young man named Kamui Shiro, who possesses startling psychic powers. But Kamui is far from alone in this destiny. Armies are gathering, other people with unique powers: the “Seven Seals,” who seem to be Kamui's allies, and the “Seven Angels,” who might be his enemies. All are somehow linked to the destruction to come, and all are now coming to Tokyo to choose sides in the upcoming battle."

This omnibus edition collects volumes 4-6 of the previously published series.  The first Vol. (collecting vol. 1-3) left me intrigued but very confused, this being my first read by Clamp I didn't know what to expect.  While I agree the artwork is absolutely gorgeous and the inclusion of the colour pages will certainly satisfy fans, I am underwhelmed by the series in general and will not be continuing.  The story is still rather confusing, though this volume does get into the back story attempting to explain the whole plot so I did end up somewhat understanding the general concept.  However, the characters really bothered me.  One minute they are all serious about saving the world and the next they are acting like complete goofs.  One guy is more interested in getting a girl to like him, one of the main female characters is so subservient and whiny it is painful and I can't get a grip on the main character Kamui.  What's up with this guy who has major attitude and can't decide if he should follow his destiny of saving the earth or help destroy it?  Tough choice to make, huh?  There are also brief overtones of BL in this volume which is so not my thing that I do not want to go any further down that road.  So, this story is not winning me over and I won't be continuing with the series.  I don't know if it is typical of Clamp or not.  I've always had xxxholic on my want to read list and am now not too sure.
Labels: 1993 2012 fantasy manga YA