128. The Lifeboat by Charlotte Rogan 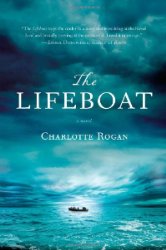 The Lifeboat by Charlotte Rogan (US) - (Canada) - (Kindle)

First sentence: "The first day in the lifeboat we were mostly silent, either taking in or refusing to take in the drama playing itself out in the seething waters around us."

Publisher's Summary: "Grace Winter, 22, is both a newlywed and a widow. She is also on trial for her life.

In the summer of 1914, the elegant ocean liner carrying her and her husband Henry across the Atlantic suffers a mysterious explosion. Setting aside his own safety, Henry secures Grace a place in a lifeboat, which the survivors quickly realize is over capacity. For any to live, some must die.

As the castaways battle the elements, and each other, Grace recollects the unorthodox way she and Henry met, and the new life of privilege she thought she'd found. Will she pay any price to keep it?

The Lifeboat is a page-turning novel of hard choices and survival, narrated by a woman as unforgettable and complex as the events she describes."

Reason for Reading: I enjoy survival-at-sea stories and this immediately brought to my mind both the Titanic and the Alfred Hitchcock movie of the same name.

I enjoyed this book.  It is short and a quick read and yet I found it didn't live up to my expectations or perhaps its full potential.  I found the plot very predictable and kept waiting for a twist or shock to come into play but every time anything of consequence happened it was already something I expected to happen.  I kept reading though because I couldn't believe that was all there was to the story and that some startling reveal was going to made at any point, but it failed to come.  The story followed its expected outcome and ended quietly on that note.

As stated I did enjoy the story; it is an interesting study in personalities when they are confined together in peril and how they will react.  Grace herself, I found to be an unlikeable character from the beginning.  She is rather cold and calculating in her motives even before the shipwreck.  She is an unreliable narrator and yet her true character easily shows through which is one point which makes the book so predictable.  I haven't read any other reviews of this book yet but I have a feeling that this is a book some people will absolutely love, while others not so.
Labels: 2012 historical fiction realistic fiction thriller