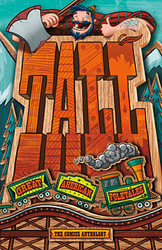 First sentence: "Have you ever read a Tall Tale?."

Reason for Reading:  I love folklore and I love the Graphic Spin series put out by Capstone Press.

This is an omnibus collection of four previously published single volumes in the series, gathered together in this affordable trade paperback edition.  An attractive, sturdily bound volume, this will make the perfect purchase for the home while the individual  volumes are more suited to libraries and classrooms.  I enjoyed all the stories and really have never been disappointed with anything from this line.  Capstone uses top quality authors and industry experienced artists.  Recommended for those who enjoy the genre.  The following describes each book included as I read it, which were originally published as separate volumes in 2010:

1.  The Tall Tale of Paul Bunyan by Martin Powell. art by Aaron Blecha.  General retelling of the usual stories associated with Bunyan and Babe: the making of the 10,000 lakes, Lake Superior, the Grand Canyon, his fight with Old Man Winter, etc.  Starts off with a cute scenario of what his childhood and parents must have been like.  A good, fun introduction to the folk hero.  The artwork is splendid in a fun, modern comic style with a bit of the grossness factor added.  A delightful addition to any collection.  4/5

2. Pecos Bill, Colossal Cowboy by Sean Tulien. art by Lisa Weber. Honestly this is not a folktale I'm very familiar with.  Of course, I've heard of Pecos Bill but the tale was not that familiar to me at all.  I found it quite silly actually, more so than other tall tales and this may be because it is believed that Pecos Bill is a modern invention rather than a true folk hero.  Apparently Pecos Bill created the Grand Canyon also.  However, the story was great fun and I love Lisa K. Weber's art.  She is also found quite often in the Graphic Classics series. Another fun story. 3/5

3. John Henry, Hammerin' Hero by Stephanie Peters. art by Nelson Evergreen. Wonderful retelling of the John Henry story which is based on some truth with a lot of legend mixed in.  I really enjoyed this one and so far find it the best one in the collection.  The author is on staff with the publisher and I've enjoyed some of her other books; the illustrator is new to me and has a wonderful style which really captures the African-American experience of this tale without actually making much of a deal about the man's race, except for the slavery/freedom issue.  A more realistic tall tale since John Henry was only a larger than normal man, not a giant or super-powered like the previous two in the collection.  The final two pages present a newspaper format historical overview separating fact from fiction and giving details on where one can visit to see memorials to this folk hero.  5/5

4. The Legend of Johnny Appleseed by Martin Powell. art by Michelle Lamoreaux. Another fun folk tale with art that is slightly manga-esque.  A good story that starts off with the tale of the real John Chapman before venturing off onto the tall tales that grew surrounding him, thus making him a folk hero.  Manages to cover all the popular tales of Johnny from his walking across a rainbow to helping the giant catfish.  The tale ends with a timeline of the real John Chapman's life.  A good ending to the collection with a familiar tale.  4/5
Labels: 2010 2012 children's books graphic novel myths