120. The Land of Decoration by Grace McCleen 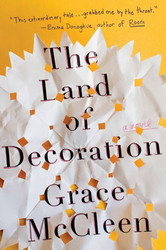 The Land of Decoration by Grace McCleen (US) - (Canada) - (Kindle)

Publisher's Summary: "In Grace McCleen's harrowing, powerful debut, she introduces an unforgettable heroine in ten-year-old Judith McPherson, a young believer who sees the world with the clear Eyes of Faith. Persecuted at school for her beliefs and struggling with her distant, devout father at home, young Judith finds solace and connection in a model in miniature of the Promised Land that she has constructed in her room from collected discarded scraps—the Land of Decoration. Where others might see rubbish, Judith sees possibility and divinity in even the strangest traces left behind. As ominous forces disrupt the peace in her and Father's modest lives—a strike threatens her father's factory job, and the taunting at school slips into dangerous territory—Judith makes a miracle in the Land of Decoration that solidifies her blossoming convictions. She is God's chosen instrument. But the heady consequences of her new found power are difficult to control and may threaten the very foundations of her world.

With its intensely taut storytelling and crystalline prose, The Land of Decoration is a gripping, psychologically complex story of good and evil, belonging and isolation, which casts new and startling light on how far we'll go to protect the things we love most."
Acquired: Received a review copy from Henry Holt & Company.

This is a tough book to review.  I loved parts of it and disliked other parts of it.  Mainly, I adored the main character, 10yo Judith, in whose voice the narrative is written.  She is naive and not always a reliable narrator but we are given events from her point of view as she sees them happen.  I read the book very quickly over two days and had a hard time putting the book down.  Parts of it were just lovely, other parts I heartily disagreed with.  As a Christian, I don't feel the author is making a grand statement one way or the other about Christianity as a whole.  I do think she is using this powerful message of father/daughter relationship, a mother's death, a girl's bullying because of her religion to show that bad things happen, even when we have the best intentions.  That fanaticism of anything is never good.  That God does not "let" bad things happen, we make our own choices and suffer the consequences of them, as rightly we should.

Judith carries this book.  She and her father belong to this unnamed religious fringe group (never named, but disclaimed to be Mormons) which is obsessed with the End Times.  Otherwise they seem harmless enough, much of their Christian doctrine can be found in true Christian denominations but then it has been twisted in a way to make it what it is in this book.  This may offend some Christian readers, but I take it that it is fiction and that these kind of kooky Christian sects do does exist though they are not the norm.  This group for the most part follows Christ; it is its obsession with Armageddon which removes it from the focus of Christ.  Non-Christians may find the book too full of Christian references, Bible quotations and simple plain Christian living; this may annoy them or unfortunately make them think this fringe group is somehow representative of "normal" Christianity.

These are the things I didn't like about the book; the constant fighting in my head with the representation of these "Christians".  Something profound would be said and then something equally laughable would be said.  As to the story otherwise, it was very good.  Judith is a naive girl who asks big questions of her father, the grown-ups at church, about religion and life.  She is always asking "why?" and she is respected for her clever questions.  At school it is the same, except with the other children, and one boy in particular, who bullies and teases her relentlessly because she is an outcast from them.  Not allowed to attend morning assembly, wearing plain clothes, and talking easily about God, Armageddon and the Den of Iniquity of the modern world.  No matter what is happening in this world around her; her being bullied, her dad being a scab, boy's taunting their house in the evening's Judith does believe in God and talks to him.  He has started to answer her back and miracles have started to happen.  Perhaps this is all in the confused girl's head or perhaps she is a real mystic.  But you will fall in love with Judith and root for her as she tries to cope with a sad life that left her motherless and alone with a father who does everything he can  for her but does not know how to show love and affection.

This book is going to take some time for me to ruminate on before I really decide whether I think it was just OK or Good.  I did like it; I'm just not sure how much.  The ending was underwhelming and with all the religion/God emphasis throughout I expected something more uplifting than what we were given.  The book did have some moments of sage wisdom and at other times I was left shaking me head.  The instructions for making a hot air balloon, I do understand their significance but as an ending it leaves one dumbstruck.  If you love stories about people pondering the purposes of God in their lives this will be the book for you.
Labels: 2012 christian magical realism