118. The Reeducation of Cherry Truong by Aimee Phan 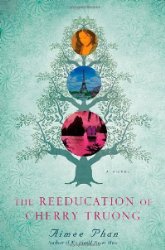 The Reeducation of Cherry Truong by Aimee Phan (US) - (Canada) - (Kindle)

First sentence: "Cherry releases the grip around her brother, steadying her trembling feet onto the hot, bright concrete."

Publisher's Summary: "Cherry Truong’s parents have exiled her wayward older brother from their Southern California home, sending him to Vietnam to live with distant relatives. Determined to bring him back, twenty-one-year-old Cherry travels to their homeland and finds herself on a journey to uncover her family’s decades-old secrets—hidden loves, desperate choices, and lives ripped apart by the march of war and currents of history.

The Reeducation of Cherry Truong tells the story of two fierce and unforgettable families, the Truongs and the Vos: their harrowing escape from Vietnam after the war, the betrayal that divided them, and the stubborn memories that continue to bind them years later, even as they come to terms with their hidden sacrifices and bitter mistakes. Kim-Ly, Cherry’s grandmother, once wealthy and powerful in Vietnam, now struggles to survive in Little Saigon, California without English or a driver’s license. Cherry’s other grandmother Hoa, whose domineering husband has developed dementia, discovers a cache of letters from a woman she thought had been left behind. As Cherry pieces their stories together, she uncovers the burden of her family’s love and the consequences of their choices.

Acquired: Received an egalley from the book's publicist.

This was an immensely satisfying read and will appeal to readers of Lisa See and more so Amy Tan.  Dealing with a South Vietnamese family who escapes after the Americans leave and they've had enough of Communist rule.  The refugee family ends up in Malaysia and then is split when the patriarch and entire family but one son and his expectant wife emigrate to Paris.  The other goes to America.  The book moves from past to present as it examines how this one episode had lasting effects on the family down to the third generation.  As the granddaughter, Cherry, of the patriarch discovers deep hidden secrets about individual family members the whole truth of that one incident becomes revealed.  The story focuses on family relationships between various members (brother/sister, cousins, grandmother/granddaughter, parents/eldest son, etc), generational relationships, cultural differences between the generations and the immigrant experience.  The story is not American centric either which makes it unique for this type of story.  Yes, one family experiences life in the US, but we also see the perspective of the Vietnamese immigrant in Paris at the same time.

There are many characters to keep track of and they are all intriguing in their own way.  I didn't really find many of them lovable as they, mostly, all, at some point show character flaws, some quite terrific, that made them hard, for me, to really like as people, but I was extremely invested in them and how their lives would work out in the end.   I love how the choices of the first generation end up affecting the third in ways that are traced back to those choices.  Could whole lives have been lived differently if selfish decisions had been set aside many years ago?

This was a quick read for me.  It took a little bit to get going as the story does switch back and forth through time, telling one person's story, then another's but once I got used to this I was turning the pages as fast as I could read.  Though the book is named after the American granddaughter, Cherry, it was the French grandmother, Hoa, who was the most intriguing character to me and I enjoyed her storyline the most.  The abrupt ending startled me, but otherwise I very much enjoyed this sometimes dark and always unforgettable story of familial ties, love and betrayal.  Aimee Phan is an author to watch for in the future.
Labels: 2012 historical fiction realistic fiction