96. The Fairy Ring or Elsie and Frances Fool the World by Mary Losure 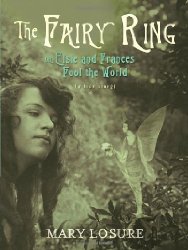 The Fairy Ring or Elsie and Frances Fool the World (a true story) by Mary Losure. (US) - (Canada) - (Kindle)


First sentence: "For as long as she could remember, Frances's parents had told her stories about England."

Publisher's Summary: "Frances was nine when she first saw the fairies. They were tiny men, dressed all in green. Nobody but Frances saw them, so her cousin Elsie painted paper fairies and took photographs of them "dancing" around Frances to make the grown-ups stop teasing. The girls promised each other they would never, ever tell that the photos weren't real. But how were Frances and Elsie supposed to know that their photographs would fall into the hands of Sir Arthur Conan Doyle? And who would have dreamed that the man who created the famous detective Sherlock Holmes believed ardently in fairies - and wanted very much to see one?

Mary Losure presents this enthralling true story as a fanciful narrative featuring the original Cottingley fairy photos and previously unpublished drawings and images from the family's archives. A delight for everyone with a fondness for fairies, and for anyone who has ever started something that spun out of control.

The enchanting true story of a girl who saw fairies, and another with a gift for art, who concocted a story to stay out of trouble and ended up fooling the world."

Reason for Reading: I've read Joe Cooper's "The Case of the Cottingley Fairies" and have since been fascinated with this story and with Doyle's involvement.  This book for juveniles sounded like it would present the story from the girls' point of view and I was eager to read it.

This is a wonderful little biography, complete with all the "fairy" photographs and others of Frances and Elsie at the time, which tells the story of how the cousins came to be together in England at Cottingly, Yorkshire. When they first saw fairies and how the pictures came to be and how ultimately their worldwide sensation came around.  The story focuses mostly on the girls themselves and the story of how they came across the fairies and decided to take pictures to "prove" themselves, is incredibly interesting and takes up a good portion of the book.  We get a real feel for the girls and their innocence, even though they created one of the biggest hoaxes of the early twentieth century that fooled such eminent figures as Sir Aurthur Conan Doyle.

One gets a sense for a lonely Frances, moved from bustling South Africa to dreary England to wait while her father volunteers to fight in the Great War.  Did she really see fairies and gnomes or was it just the daydreams of a lonely little girl?  One also senses Elsie's otherwise mundane life as a young school-leaver, working in a factory, trying to protect her young cousin and coming up with what at first seems an innocent ploy to stop the grown-ups pestering them.  Little did they know the world they lived in was chock full of spiritualism and the existence of fairies and other little people were on the minds of many such spiritualists of the day.  Once their pictures are seen outside the family, a flood of interest descends upon them which they cannot stop.  The two girls, turn into women and their frolic with fairies will forever haunt them.

I'd love to read Frances' autobiography in which she does continue to affirm that she did see some fairies in the beck behind her cousin's house but it is unfortunately not in print at this time.  The story is very compelling to me though, that I've decided to go a step further and have purchased the Kindle edition of Doyle's 1922 study entitled "The Coming of the Fairies".
Labels: 2012 biography children's books history non-fiction paranormal