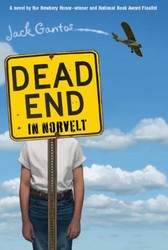 
First sentence: "School was finally out and I was standing on a picnic table in our backyard getting ready for a great summer vacation when my mother walked up to me and ruined it."

Publisher's Summary: "Melding the entirely true and the wildly fictional, Dead End in Norvelt is a novel about an incredible two months for a kid named Jack Gantos, whose plans for vacation excitement are shot down when he is "grounded for life" by his feuding parents, and whose nose spews bad blood at every little shock he gets. But plenty of excitement (and shocks) are coming Jack's way once his mom loans him out to help a feisty old neighbor with a most unusual chore—typewriting obituaries filled with stories about the people who founded his utopian town. As one obituary leads to another, Jack is launched on a strange adventure involving molten wax, Eleanor Roosevelt, twisted promises, a homemade airplane, Girl Scout cookies, a man on a trike, a dancing plague, voices from the past, Hells Angels . . . and possibly murder. Endlessly surprising, this sly, sharp-edged narrative is the author at his very best, making readers laugh out loud at the most unexpected things in a dead-funny depiction of growing up in a slightly off-kilter place where the past is present, the present is confusing, and the future is completely up in the air.."

Reason for Reading:  The book is this year's (2012) Newbery Medal winner and I always read each new winner as I'm working my way through the entire list.  I had never read this author before.

Having never read Jack Gantos before, honestly I've never looked past the titles of the others, I didn't know what to expect from this award winning novel.  I was very pleasantly pleased.  While set in Pennsylvania (in the existing town of Norvelt) the book is written with a typical Southern flare including a cast of eccentric characters.  The book is suitable for those tween years (10-14) and made for a very engaging read.  Since the boy in the book is named Jack Gantos and the author bio on the back cover tells us Jack actually grew up in a town called Norvelt we can probably surmise that this tale contains some biographical elements of the author's own childhood.

A coming of age story, this book focuses on the summer a boy turns twelve, he has been grounded for a serious mishap for the entire summer.  The  motley cast of characters include his neighbour to whom his mother hires him out to help write the obituary's for the town's original settlers, Mrs. Volker is crippled with arthritis of the hands and has lived an exciting life which she shares with Jackie both through conversation and the obits.  There is crazy old man Spizz, who is like the town's by-line enforcer and he rides around town on a giant adult tricycle.  Jack's best friend, Bunny, a girl his age who is half his size and is meaner and tougher than almost any guy around is ticked off that Jack can't play at all this summer.  With being grounded to his room, Jack spends a great deal of his time reading, having an old set of Landmark History books, he quickly reads through those and imparts what he's read and thought cool back to the reader.  This really endeared him to me as I went through a period in my life in which I read all those books too.

Another thing about Jack, which some readers may find odd, but also endeared me to him right away is that he has numerous nosebleeds.  His seem to come on whenever he gets uptight, nervous or scared.  Then his nose blows a gaskets and bleeds everywhere.  Medically the capillaries are too close to the surface in his nose and need to be cauterized but his poor family has to save up, very slowly, for this.  I too had constant nose bleeds as a child and right up into my mid-twenties, for the exact same reason!  Mine were brought on by climate changes.  Hot/sunny one day, chilly/damp the next and I was sure to have a nose bleed.  They occurred where ever I was: on the bus, in the movies, walking down the street, etc.  I was told about the operation but my bleeds just gradually stopped when I moved to a much higher altitude and they've never returned even though I've returned to the low altitude.

This was my type of book, along with the quirky characters, add in a running theme of death, wry humour, a possible murder going on, strange events going on in his Dad's workshop, and you have an exciting, never dull story of a boy coming of age, of a town trying not to die, a family that loves one another and a place where neighbours still care for each other.   A good read.  I'm enticed to at least take look at Ganto's other books, now.
Labels: 2011 children's books humour realistic fiction