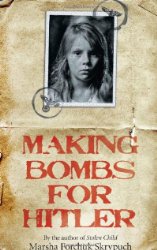 First sentence: "The room smelled of soap and the light was so white that it made my eyes ache."

Publisher's Summary: "Lida and her younger sister are caught by the Nazis and separated. Lida is sent to a slave labour camp, where she works from dawn to dusk on only bread and soup. clad in one thin dress and no shoes. Even if she manages to survive the war, how will she find her sister again?"

Reason for Reading:  The author has become one of my favourite Canadian juvenile authors.

This book is a companion to 2010's Stolen Child.  Each book tells the fate of two Ukrainian sisters as they are separated in the middle of WWII.  The books need not be read in any particular order.  Making Bombs for Hitler details what happens to the eldest sister, Lida.  The first couple of pages describe her parting from the younger sister, which is told in much more detail in Stolen Child.  Lida is then sent to a Nazi slave labour camp where many Ukrainians were herded and sent to for the duration of the war.  Since the Ukraine, at the time was part of Russian territory, the Nazi's labeled all Ukraines as Russians and thus as enemies at this time in the war.  The Ukrainians (Russians) were the lowest of the low in prison camps and treated the worst of the worst.

Skrypuch tells a compelling story that pulls no punches.  While keeping the book tame enough for the intended audience she manages to still tell of the horrors that went on in these camps.  The starvation, enforced labour under extremely dangerous conditions, the beatings and rough treatment and the "experiments" that went on at the hospital.  It is a brutal story of reality, yet as mentioned age appropriate, though not recommended for especially sensitive children.  Marsha is an author who writes as if she actually knew her characters and they become real as life to the reader.  This is a haunting story of how the Nazi's treated prisoner enemy children, and especially of the plight of the Ukrainians as an ethnic group during WWII as they were a people without a home, being divided between two enemies, the Nazis and the Soviets.  Excellent book, highly recommended, especially in conjunction with its companion, Stolen Child.
Labels: 2012 Canadian author children's books historical fiction war WWII