108. Lex Luthor and the Kryptonite Caverns by J.E. Bright 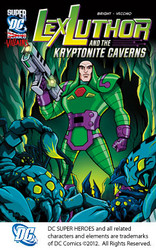 
First sentence:  "Lex Luthor, after all his years of trying, had finally discovered a foolproof method to destroy Superman."

Publisher's Summary: "Deep below a Southwestern desert, wealthy mogul and super-villain LEX LUTHOR constructs a top-secret device to destroy his top enemy, SUPERMAN. Unfortunately, radiation from the KRYPTONITE-powered weapon has leaked into the surrounding soils and turned scorpions, snakes, and other arid animals into super species! To stop the fearsome fallout, the MAN OF STEEL must travel into the kryptonite caverns, face his worst enemy, and overcome his greatest weakness!"

Reason for Reading: We love the DC Super Heroes series and were excited to see this new companion series featuring the villains!

This was just as much fun as I expected.  The whole story is told from Lex Luthor's point of view as he puts his plan into action to finally finish off the Man of Steel.  Everybody loves a good supervillain and some of these all-time classics are more fun than the superheroes!  We watch with glee as Luthor's trap to weaken Superman works like a charm but at the same time Lex is being his usual over-confident self and ignoring a possible bigger problem.  It's fun watching Supe going down because we know that the end he'll find a way come out of this trap.  Laughs abound when Lex is caught by his own machine and yells for Superman's help, making the two of them team up at the end to escape Luthor's dangerous caverns.  Super hero (I mean villain!) fans are going to love these!
Labels: 2012 children's books early chapter books science fiction superheroes