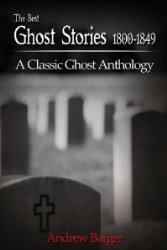 
First sentence: "All cats are gray in the dark."

Publisher's Summary: "Ghost short stories became popular in the first half of the nineteenth century and this collection by Andrew Barger, award-winning author, contains the very scariest of them all. As he has done with a number of other books, Andrew Barger has added his scholarly touch to this collection by including story backgrounds, annotations, author photos and a foreword titled All Ghosts Are Gray ."

Acquired: Received a Review Copy from the author.

Reason for Reading: I have a particular interest in the Gothic story and my favoured literature time period is the Victorian era, which admittedly doesn't start until 1837.  But both the time frame of this book and the life works of the included authors does fall within my preferred historical reading period.

This is a fine collection of ghost stories.  Andrew Barger has done an excellent job of combining the familiar with the obscure both in title and author selection.  He has written an interesting, engaging introduction to the topic and his choices of stories.  From this introduction the reader knows they have an editor who knows the literary time period and genre being presented.  Preceding each story is an introduction by the editor with background information on the story and the author in relation to the particular story.  This is invaluable reading and is a joy for the reader to have this contemporary insight before proceeding with the story.  I always appreciate an anthology that introduces each story.  Following the collection of nine stories, is a long list of stories from which Andrew Barger read to select those he called "best" for this collection.  This would make a great reading list for the enthusiast!  I found most of the stories very good, with several excellent, only a couple merely good and just one less than satisfying.  Mr. Barger has several other books which look like they would make excellent reading.  The stories included and my impressions:

1. Adventure of the German Student by Washington Irving - A depressed German student goes to "gay Paree" for his health, unfortunately it's just as the French Revolution gets underway.  Sickened by the blood of the guillotine he becomes a recluse and dreams of a woman.  One night as he takes a walk, the only time he'll ever leave his flat, he meets the woman of his dreams, and has an encounter that literally drives him insane.  Good, even though I'm not a huge Irving fan. 3/5

2. The Old Maid in the Winding Sheet by Nathaniel Hawthorne - Two women who loved the same man who dies young make a pact to meet up again in the room of his deathbed, in the distant future.  One to go on and make something of her life, the other to stay in the village, a recluse, following death.  This was pretty creepy and I enjoyed it a lot.  Hawthorne is hit and miss with me.  I don't like his novels but his stories usually win me over, as did this.  4/5

3. A Night in a Haunted House by Anonymous - This was an ideal ghost story.  A naysayer after hearing the story of a haunted house, from a parson no doubt, asks to spend the night in the abandoned house to prove there are no such things as ghosts, only overactive imaginations.  Needless to say he has an eerie evening and becomes a believer.  This is a long short story, clocking in at 30 pages and a very good read.  Really two stories in one, first the parson's story and then the other man's story; I can imagine how it would have hit the sensibilities of the public at the time it was written (1848) being quite creepy and containing the classic qualities of both the ghost and Gothic story.  For the modern reader it's not hard to guess the twist at the end fairly early into the second part of the story, but still it is an eerie, fun story and one I enjoyed a lot.  A classic ghost story of this era (5/5)

4. The Story of the Spectral Ship by Wilhelm Hauff - A new-to-me author, here with a Flying Dutchman type of ghost ship story.  The main characters are Muslim, making it rather unique for its time. A well-told eerie ghost tale.  I'd love to read more of the author.  (5/5)

5. The Tapestried Chamber by Sir Walter Scott - I wasn't looking forward to this story as Scott always brings to my mind his horrible historicals such as "Ivanhoe" and his wretched poetry.  I didn't know he was a fan of this genre as well, so was pleasantly surprised at how much I enjoyed this classic tale of an upstanding military General spending the night in an haunted room.  Tame by today's standard's but a disturbing story nevertheless. (5/5)

6. The Legend of Sleepy Hollow by Washington Irving - Everyone knows this tale from one source or another.  I've read it before and didn't like.  It is long, Irving's writing is too old-fashioned for me and I just don't find the story scary or creepy.  It's been about 8 years, so I gave it another go, but found it just as boring as I previously always do. (2/5)

7. The Mask of the Red Death by Edgar Allan Poe - I've read Poe many times.  This is classic!  Extremely creepy, the images the words create in your mind are just impossible to render in visual media.  It is very debatable whether this is a ghost story, though.  I've never thought of it as such.  The character, to me, here is Death, or Disease manifested, not a ghost.  Nevertheless a fine story!  5/5

8. A Chapter in the History of a Tyrone Family by Joseph Sheridan Le Fanu - With one short story left to go I don't think it's too early to call this long short story the "piece de resistance" of this collection.  A masterpiece of a story whose plot has been retold numerous times by now but as the original still manages to thrill and shock.  The plot follows a theme used in Jane Eyre and yet pre-dates that classic by 8 years prompting the editor to include an afterword to this story alone that convincingly suggests Bronte "borrowed" from it.  I'm not very familiar with Fanu's work but I would certainly like to explore him further!  5/5

9. The Deaf and Dumb Girl by Anonymous - This is another fine example of an eerie ghost story that tells the tale of a tragic used, spurned woman whose spirit waits for the return of her ruthless lover to exact revenge upon him.  This is an obscure story the editor says has not been published since its original appearance in 1839.  A chilling tale to end the volume with!  4/5
Labels: 2011 ghost story gothic short stories Victorian