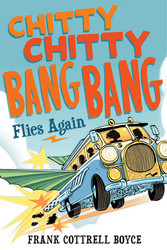 Publisher's Summary: "When the Tooting family finds an old engine and fits it to their camper van, they have no idea what kind of adventure lies ahead. The engine used to belong to an extraordinary car . . . and it wants its bodywork back! But as the Tootings hurtle across the world rebuilding the original Chitty, a sinister baddie is on their trail -- one who will stop at nothing to get the magnificent car for himself.

Fueled by wry humor, this much-anticipated sequel to the children’s classic by Ian Fleming, creator of James Bond -- featuring a contemporary family and a camper van with a mind of its own -- is driven by best-selling, award-winning author Frank Cottrell Boyce and revved up by Joe Berger’s black-and-white illustrations."

Reason for Reading: I love Fleming's original Chitty Chitty Bang Bang book and have read it several times. as a kid and as read-alouds to my own kids.  It's always been a favourite.  I've never been much of a fan of the movie, though, probably because of the drastic changes to plot.  I don't usually read these kind of sequels to classic books but this was commissioned by the Fleming estate and Fleming did only write the one book, so I decided to try this and see if it recaptured the magic of the original.

It certainly did!  I was particularly amused throughout the book.Mr. Boyce has done a very good job of maintaining the voice and atmosphere of the original while making the story completely his own.  This story takes place in modern times and involves the putting back together of the original Chitty car, which all starts with the Tootings family finding the engine and installing it in their Camping Van.  At this point, Chitty is able to take over the van and drives (or flies) the van all over the world (namely 'Paris, Cairo and below the ocean.)  The book is also very British, with spellings, word usage, slangs and humour.  A delightful little story which has  a bit of a slow beginning but gets better and better until the wonderful ending, which leaves us expecting a sequel.
Labels: 2012 children's books fantasy humour magical realism