76. A Grown-Up Kind of Pretty by Joshilyn Jackson 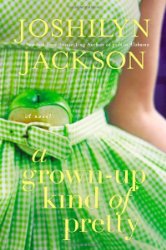 First sentence:  "My daughter, Liza, put her heart in a silver box and buried it under the willow tree in our backyard."

Publisher's Summary: "A GROWN-UP KIND OF PRETTY is a powerful saga of three generations of women, plagued by hardships and torn by a devastating secret, yet inextricably joined by the bonds of family. Fifteen-year-old Mosey Slocumb-spirited, sassy, and on the cusp of womanhood-is shaken when a small grave is unearthed in the backyard, and determined to figure out why it's there. Liza, her stroke-ravaged mother, is haunted by choices she made as a teenager. But it is Ginny, Mosey's strong and big-hearted grandmother, whose maternal love braids together the strands of the women's shared past--and who will stop at nothing to defend their future."

Reason for Reading:   I love southern fiction and have had this author on my want-to-read list for some time now.  I actually own one other of her books (I won it) but haven't read it yet and finally got around to reading her with this book.  I just love the cover!  I used to have a few gingham summer dresses as a kid.

I adored this book!  What a beautiful, touching story.  Set in Mississippi, each chapter is told from the point of view of one of the three women, each 15 years apart in age: Mosey is 14-turning 15, her mother Liza is 30, and Ginny, *her* mother, the grandmother, is 45.  I loved every single one of these characters and simply took them into my heart.  The story was sad and touching, yet full of hope against all odds.  A despairing story that was uplifting at the same time.  There is a mystery in the plot and I came up with a solution pretty much near the beginning which was continuously confirmed for me throughout the book, so I was quite shocked when 2/3 of the way through my theory became impossible and the mystery sorted itself out in a completely different direction.  I loved this as I figure out mysteries too easily and like it when I'm wrong!  I only had one problem with the book and that was that it was a slow read for me, I really don't know why but every time I picked it up I seemed to be reading at a very lazy pace.  I was loving the book, but nothing could make me read at my normal speed until the last third of the book when the solving of the mystery comes into play and the action picks up, that part I read quickly.  Now there is nothing wrong with a slow read, sometimes a book just demands that you take it in at a leisurely pace and mull it over.  I actually kept wishing it was warmer out and I was reading the book under a tree somewhere.  Trees are a symbol in the book.  This will make a good vacation read, perhaps to take to the cottage with you.  I will certainly be adding Joshilyn Jackson to my list of regularly read authors!
Labels: 2012 mystery southern fiction