43. Dragonbreath: Revenge of the Horned Bunnies by Ursula Vernon 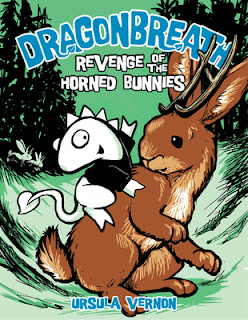 Dragonbreath: Revenge of the Horned Bunnies by Ursula Vernon (US) - (Canada) - (Kindle)
Dragonbreath, #6

Sheriff Dragonbreath entered the canyon with his six-gun in his hand.

Publisher's Summary: "Ride 'em, cowboy! Danny's off to summer camp! Danny Dragonbreath is counting down the days to his awesome western summer camp . . . until he gets the terrible news that his annoying younger cousin Spencer is going too. Good-bye, Danny the Cowboy; Hello, Danny the Babysitter. But when Spencer befriends a mythical jackalope (or horned bunny) and then uncovers a diabolical jackalope-napping ring, things start looking up again. After all, if you need a math problem solved, you call a nerd. But if you need a villainous ring of horned-bunnynappers broken up, you call Danny Dragonbreath."


This is certainly the most well-written story in the Dragonbreath series to date.  We have a complete developed plot, with adult antagonists, that progresses following conventional plotlines.  The book actually involves a mystery that is solvable by the reader if they pay attention to the clues given out along the way.  Danny and Wendell have become bonafide complete characters with their background stories built up over the last several volumes to create two very good, but opposite best friends.  The reader can count on how each will act in certain situations and we know their strengths and weaknesses, but also knowing, more than they do, that their friendship is stronger than the sum of their parts, proving they can overcome obstacles for each other.  This strong friendship, at this time in the series, welcomes the addition of Christiana as a third member of the team, having met her in the last book.  Her character is given some good development to allow some interplay between both Danny and Wendell as well as a bit of a background story.  We are also, once again, introduced to a new relative of Danny's only this time it is a younger cousin, but it does bring back the recurring theme of the previous books where Danny visits a relative, only this time the relative visits him.

A solid plot and a good story, though lacking a little in the humour department.  I didn't find this one near as funny as the others, perhaps because it was more serious when the antagonists are adults (mind you, still animals) and the victims are cute animals, even if they are mythological jackalopes.  There were funny scenes and lines but on the whole more of an adventurous frolic than the simple humorous story of the previous volumes.  A solid entry in the series.
Labels: 2012 animal fantasy children's books graphic novel