36. Women of the Titanic Disaster by Sylvia Caldwell 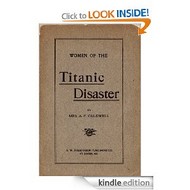 Women of the Titanic Disaster by Sylvia Caldwell. Foreword by Julie Hedgepeth Williams (Kindle Only)

I have been sitting in the dusk, rocking to sleep the precious young life that was spared to me from the last great disaster and my heart goes out to the heart broken mothers whose babes have been snatched from their arms.

Publisher's Summary: "Sylvia Caldwell was onboard the Titanic when it sank in 1912. As one of the disaster's survivors, she took it upon herself to write an account of what happened in the event's aftermath. Women of the Titanic Disaster details Sylvia Caldwell's journey immediately following the sinking of the Titanic, and it gives us a fresh perspective on this historic event. With a foreword by Julie Hedgepeth Williams, author of A Rare Titanic Family: The Caldwells' Story of Survival, a biography of Sylvia Caldwell and her family."

Reason for Reading: I will be reading the non-fiction book about this woman's life and experience on the Titanic and thought this would be of historical interest as a pre-read.

This tiny booklet is interesting only because of its historical significance. If you are a completest in your Titanic readings then this will surely be of value to you. It really has no literary merit. Mrs. Caldwell's account is brief and concerns her time in the raft and onboard the rescue ship. She waxes poetic about the heroism of the women who survived saying it took much more bravery to carry on and live than it did to stay and go down with a husband. Of course, this is the English-speaking women as she sets aside the "foreign element" from the beginning. Mrs. Caldwell's account is melodramatic but is also historically engaging as it describes the sights and sounds from the raft and how the middle/upper class women fared after being rescued. One certainly wonders whether Mrs. Caldwell wrote her little booklet hoping to make some extra money for her family rather than from any sense of duty. Not that there's anything wrong with making money. Included is a foreword by the author of a non-fiction book on the Caldwell family, a relative, then a poem by "Beecher" followed by Mrs. Caldwell's account which includes both a picture of herself and one of her baby. Then comes a "Hymn for Survivors of the Titanic" by Hall Caine followed by the hymn "Nearer, My God, to Thee". Finally there is a brief "About the Author" which tells briefly about Sylvia Caldwell. All in all, I am thrilled this piece of history has been made available to the public and pleased to have read its contents.
Labels: 1912 2011 history memoirs non-fiction titanic