34. The Flint Heart by Katherine Paterson 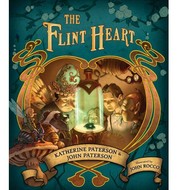 The Flint Heart: A Fairy Story Freely Abridged from Eden Phillpotts's 1910 Fantasy by Katherine and John Paterson. illustrated by John Rocco (US) - (Canada)


Many years ago, oh, let's say five thousand, more or less, there lived in the south of England, in what is called Dartmoor, tribes of people who had never thought to make anything out of metal, much less plastic.


An ambitious Stone Age man demands a talisman that will harden his heart, allowing him to take control of his tribe. Against his better judgment, the tribe’s magic man creates the Flint Heart, but the cruelty of it causes the destruction of the tribe. Thousands of years later, the talisman reemerges to corrupt a kindly farmer, an innocent fairy creature, and a familial badger. Can Charles and his sister Unity, who have consulted with fairies such as the mysterious Zagabog, wisest creature in the universe, find a way to rescue humans, fairies, and animals alike from the dark influence of the Flint Heart? This humorous, hearty, utterly delightful fairy tale is the sort for an entire family to savor together or an adventurous youngster to devour.

Reason for Reading: I enjoy the author and would read any new book by her that piqued my interest.  I read this aloud to my son.

I'll start by saying that my son enjoyed this book much more than I did.  That is factored into my rating.  I read a chapter a day but before each reading I'd have my son give me a little recap on what happened last time as I was honestly so bored I couldn't remember what was going on.  I kept thinking about the last book we read together!  However when we were finished the book, my son's response was that the book had been "awesome!" and "Is there a sequel?" Go figure.


The story is repetitive.  Someone finds the flint heart, wears it, and turns nasty.  Then when someone else manages to get it away from them they fling it away only to later have another unfortunate soul find the flint heart again to repeat the process once more.  Here we have our classic fairy tale element and I'll say my son (and I) are big fairy tale fans and I think he found comfort and enjoyment in the predictability of that plotline.  Of course, our hero's task is to destroy the flint heart completely causing some adventure.  Ds enjoyed the characters mostly.  The wise old Zagabog, the funny fairy king and queen, as well as the other fairy characters; and he enjoyed both of the protagonists, a boy named Charles and his little sister Unity.

I was interested in the original this was "abridged" from, so started reading some of it online and a lot of the language has been kept, with whole phrases verbatim.  What seems to be missing is the depth of language present in the original.  I actually found myself getting interested in Phillpott's story and found his sense of humour dry and witty, something completely missing in this adaptation.  The Kindle edition is too expensive for a public domain book but if I find it for up to 2 bucks, I'd like to read the original, which is much longer also.  One point I must make is that the artwork by Rocco is beautiful.  Large paintings that take up almost the entire 2-page spread in luscious earth tones.  They are a pure delight to behold.
Labels: 2011 children's books fairy tales fantasy