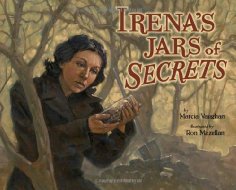 Irena's Jars of Secrets by Marcia Vaughan. Illustrated by Ron Mazellan (US) - (Canada

On a cold February day in 1910, a baby girl was born to a Catholic family in a small town near Warsaw, Poland.

Acquired: Received an egalley from Lee & Low books through Netgalley.

Reason for Reading: I enjoy this type of children's biography and the Catholic connection interested me.

Publisher's Summary: "Irena Sendler, born to a Polish Catholic family, was raised to respect people of all backgrounds and to help those in need. She became a social worker; and after the German army occupied Poland during World War II, Irena knew she had to help the sick and starving Jews who were imprisoned in the Warsaw Ghetto. She began by smuggling food, clothing, and medicine into the ghetto, then turned to smuggling children out of the ghetto. Using false papers and creative means of escape, and at great personal risk, Irena helped rescue Jewish children and hide them in safe surroundings. Hoping to reunite the children with their families after the war, Irena kept secret lists of the children’s identities."

This is a picture book biography of a Polish Catholic heroine, whose legacy has been hidden in obscurity due to the Communist state of Poland after the war. However, Irena's story did get out and has become wider known thanks to books like this. Though a picture book, this is one for the older set. I'd recommend it for the 9-12 age group or a younger child only if they are aware of the reality of the killing of the Jews in WWII. Irena's story is told wonderfully and we get a glimpse of what makes an ordinary person a hero. How bravery and courage are a part of a person's moral compass, and beliefs in human dignity can cause one to accomplish great deeds with no thought to their "greatness", simply just to their "rightness".

The accompanying illustrations are beautiful and fit the mood of the story. They are dark and by that I mean using a dark colour palette to remind us of the desolate atmosphere of the Polish ghetto. I'm not sure what medium the work is done in, perhaps guache or chalks, but it is very effective and blending and shadowing has been used to great effect. A great insight into the Jewish Polish ghettos of WWII and a little known Catholic hero. Would make a great addition to Catholic school classrooms.
Labels: 2011 catholic children's books historical fiction picture books war WWII