22. Out of Slavery by Linda Granfield 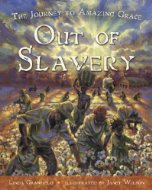 Out of Slavery: The Journey to Amazing Grace by Linda Granfield. Illustrated by Janet Wilson. (Canada) - (US)

In the oppressive night-blackness, the horizon melted into the sea as the African moved towards the West Indies.

Reason for Reading: I love Linda's other two book's which are based on the stories of poems and the lives of the authors.  I was intrigued to hear the story of the man who wrote the legendary hymn "Amazing Grace".

Publisher's Summary: "The story of slavery, a man, and the world’s most beloved hymn.

John Newton led a rich life. He was a God-fearing man and a successful seafaring trader; his cargo was a lucrative business, for his wares were human beings. In 1748, Newton’s ship, the Greyhound, sailed the triangular trade route from Liverpool to Africa and on to Antigua as it had many times before. But on one journey, at the height of the slave trade, a storm raged. Feeling all was lost, Newton prayed that if he were spared, he would leave the cruel world of slave trading behind forever. That night, Newton’s prayers were answered, and true to his word, he turned his back on the slave trade. In fact, he went on to become an ardent abolitionist. Among Newton’s many achievements, his greatest legacy would be the most beloved hymn of all: “Amazing Grace.”"

This is a beautiful book, both visually and the story it has to tell.  First of all, even though this is a picture book, it is not for small children.  The recommended age is 9-12 and I'd add anyone over 12 as well.  The story is intense.  John Newton lived in cruel times and he participated in them as much as anyone else did.  This book brought home to me how much we human beings are a product of our times, no matter how "good" one thinks oneself to be.  Ms. Granfield does not hold back on any of the cruelty of the slave trade, and we are talking the British colonial slave trade here, but she does not resort to graphic detail, she does not need to.  The simple truth and brief glances are more than enough to convey this horrid piece of history, while the haunting paintings only add to the reality.

John Newton comes across as a "nice" man, even a "good man" of his era.  Here we see moral relativism in action.  He is certainly a "better" slave trader than most of his contemporaries, not crowding his ships, while others filled their ships with "cargo", he called them "men" & "women" and perhaps this had something to with his own fifteen months he spent kidnapped and serving as a slave himself in the West Indies or his own religious beliefs he was brought up with.  It was this life, his own suffering, the suffering he saw and the suffering he caused that turned him into an evangelical  minister and writer of hymns, including the most well-known hymn in the world to all denominations, Amazing Grace.  A poignant, hard-hitting story which will make the hymn even more meaningful to its singers once they know how it came to be.  This book will be a keeper for my shelves.
Labels: 2009 biography Canadian author children's books history picture books YA