244. Tales From India: Stories of Creation and the Cosmos by Jamila Gavin 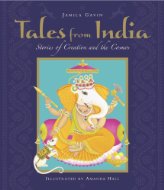 Tales From India: Stories of Creation and the Cosmos by Jamila Gavin. Illustrated by Amanda Hall. (US) - (Canada)

Before the world began, there was only a white sea of milk.

Reason for Reading:  I enjoy reading mythology.  Hindu mythology is relatively new to me and I have been reading it a bit this year.

This is a beautiful large illustrated children's book that can be read by anyone interested in the stories of Hindu mythology.  The book starts with the tales of creation, the creation of the gods, creation of man and finally various adventures of the gods and half-gods.  I find the stories to be much more fantastical than other mythology but they hold strong to the same themes of good vs. evil, gods vs. man, and stories of how things came to be.  I also find the Hindi tales to be much more romantic than others as well.  There are many stories of love along with warriors and battles.  Many of the Hindu gods are introduced here and this is an excellent book for an introduction to Hindu mythology.

The illustrations are beautiful and the author has used authentic Indian art styles from the past and present, especially using miniature painting for the fine details of her paintings.  The gods are fantastic creatures with many arms, parts human/parts animal, or simply wondrous creatures and they come to their full splendour under Hall's brush.  A beautiful book to add to any mythology collection and perfect as a primer on basic Hindu myths.
Labels: 2011 children's books myths picture books