223. One More Elephant by Richard Sobol 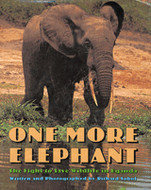 One More Elephant: The Fight to Save Wildlife in Uganda by Richard Sobol. (Canada) - (US)


Why have elephants captured the imaginations of so many scientists, artists, photographers, and children around the world?

Reason for Reading: I am reading Richard Sobol's entire backlist with my son and discussing the life of a photographer/photojournalist as a career option while doing so.

This book is dated, being over fifteen years old in the telling of its story but it was a captivating story at that.  My ds was extremely full of questions and it got to the point where I had to make him promise to wait until I had finished a page before he started in with the questions!  This tells the story of the Queen Elizabeth National Park in Uganda, Africa just after the rule of Idi Amin.  It very (very) briefly mentions the civil wars and the affect on the people but then focuses on how the park and its wildlife were destroyed by militia camps and poachers during those ten years.  Then the book tells the story of how they started to put the National Park back together again, focusing on the elephants who took a devastating hit in numbers, and the poachers who killed them for their tusks alone, as well as poaching in general.  We learn about the rangers, how they survived on the park and were now ragtag barefoot poachers themselves with no equipment to properly look after the park, we learn of the donations from people all over the world of heavy duty trucks to bring food and clothes to the rangers and their families, the new training they received and the all-out national campaign to end poaching through tough laws and public education.  Then we watch as the park begins to recover.  As I said, the book is dated as it states near the the end, "This is a beginning.  It is still too soon to know if the elephants will survive here."  One can easily visit the Queen Elizabeth National Park's website to see that it is a flourishing game reserve and noted to be Uganda's "most visited".  As I write about Sobol's books I can only feel redundant when I keep saying the photography is fantastic, wonderful and really makes the book.
Labels: 1995 children's books non-fiction picture books