202. Canada, Our History: An Album Through Time by Rick Archbold 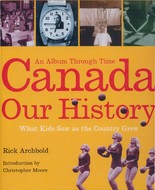 Canada, Our History: An Album Through Time by Rick Archbold. Introduction by Christopher Moore (Canada) - (US)

Tomorrow we land in Canada, at the great port city of Quebec.

Acquired: Bought a new copy from a book store probably back in 2000.

Reason for Reading:  I've been reading a chapter here and there out of this book out loud to ds all year long as we studied 20th century North American history.

This is a fabulous book, which unfortunately didn't stay in print for very long.  Starting with a chapter about an immigrant arriving in Canada in 1903 and ending with the Y2K Millennium this book presents various events from Canadian 20th century history as seen through the eyes of young Canadians (ages 10-17).  The narrators themselves are fictional but the events they describe are factual.  Each chapter is loaded with photographs and the text is larger than usual making it aesthetically pleasing and easy to read.  The book itself is larger than usual and is almost square in shape, close to a coffee table sized book.  The first hand account narratives make for very interesting reading and both my son and I enjoyed the book very much.  The topics covered are quite unique as well, not just what you would expect.  In all there are 15 episodes from our past including such topics as:  The Halifax Explosion, The Calgary Stampede, Dionne Quintuplets, Hurricane Hazel, Expo '67, FLQ Crisis, Canada/USSR hockey game, and the Oka crisis.  Everything was wonderfully portrayed and surprisingly my son was very caught up with the FLQ Crisis which I thought he wouldn't understand at all.  But he's all boy, that one.  Call in the army and he's on the edge of his seat. LOL.  The only thing I wasn't impressed with was the portrayal of the Oka crisis which was purely from the Indian perspective and highly biased.  However, this is a keeper on my shelves!
Labels: 2000 Canadian author children's books history non-fiction