185. Bone Beds of the Badlands by Shane Peacock

Bone Beds of the Badlands by Shane Peacock (Canada) - (US) (Out Of Print)
A Dylan Maples Adventure, #3

Reason for Reading: next in the series

I have thoroughly enjoyed the first two books in this series and book three brings forth the best of the series by far.   Peacock has written a true thriller that will keep kids on the edge of their seats.  Certainly much more scarier than the previous two and as a reader I can see a bit of the author's talent for the gripping "Boy Sherlock Holmes" series starting to shine through in this book.  Once again Peacock totally changes the scenery and cast of characters to bring a fresh new story for Dylan making sure this series never suffers from "series sameness".  Dylan and three friends (all on the same hockey team) have won a trip to Drumheller, Alberta due to winning a science fair.  Accompanied by their science teacher and his wife, upon their arrival news reaches them that one of Canada's most dangerous criminals has just escaped from an Alberta prison and is probably heading the same way they are going.  Now Peacock never used the words "serial killer" to describe this killer but it is implied through the various words and phrases used to describe the escapee and his crimes.

Of course, it is predictable that the kids will get separated from the adults, meet up with said criminal, have there lives threatened and have a slight hand in apprehending the man who looks as scary as he sounds.  But it is a riveting ride through unique territory as the group explore the badlands of Alberta.  Once they arrive at the Royal Tyrell Museum they are met up with another group of same-aged local students and a girl, Dorothy, is added to their group as the voice of local guide.  Of course, Dylan, though never having romances, seems to be a girl-magnet and the two become close friends and they become the main characters, together propelling the plot along.  A great story any mystery loving juvenile or pre-teen is going to love!

I'm highly recommending this series especially for its geographic introduction to different areas of Canada.  This time though, I was particularly biased, as I lived in Calgary at the time the book was written and had been to Drumheller and visited all the sites mentioned.  Peacock did a fabulous job of describing the ever changing land of Alberta and the strange world of the Hoodoos.  When one rounds the curve on the highway and is suddenly faced with Horseshoe Canyon, Peacock's use of the word of feeling like one has arrived on "Mars" is brilliant! 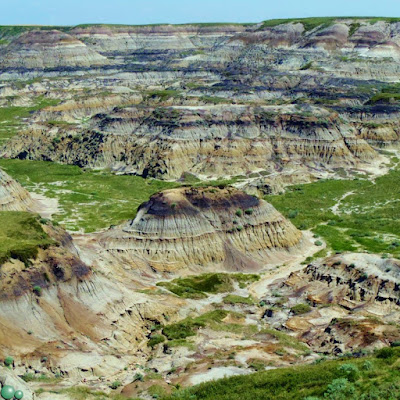