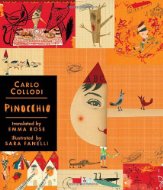 Reason for Reading: Read aloud to the ds.  This is actually my third attempt at reading this book to him.  Pinocchio is one of my favourite children's classics.  The first time was when he was five and was my edition that I had read, an old Rainbow Classics, but I think he was just too young.  The second time, he was older and at that time I had a different edition, don't remember which, but it was an awful translation and we gave that up as well.  So my hopes of reading him Pinocchio were put on the shelf until I saw this edition, which noted it was a brand new translation and I was taken right away with the collaged/mixed media artwork which I used to dabble in myself.

Starting with the art, the book is beautiful.  I love this collage, mixed media art style and each page was a visual delight to me and my son, who has seen me dabbling in the art myself.  An extremely gorgeous book.  A square, softcover with french flaps make for easy handling and browsing.  Ds would often pick the book up between reads and just look at the pictures.

There's no need to give a summary, I think everyone is acquainted with the story of the wooden puppet who wants to become a real boy.  But if you've only been exposed to the Disney version, then just let me tell you that you do not really know the true story of Pinocchio, which is rather moralistic in teaching boys to be good boys and quite violent along way.  One part that always makes me smile (because I hate Disney's Jiminy Cricket character) is that in the book when Pinocchio meets the cricket (no name, btw) who moralizes with him to annoyance is that Pinocchio's final response is to pick up a mallet and throw it at him, squashing the irritating bug against the wall. LOL.  The cricket's ghost does return to annoy Pinocchio some more.  DS thoroughly enjoyed the story as he wasn't familiar with it.  He saw the Disney movie as a little kid but it had too much slow singing in it so he didn't like it, or pay much attention to it.  He loved when anyone got what they deserved, even Pinocchio, and he found it fun when he could see it coming.  The whole story is a lot of fun.  With the modern translation and the new illustrations, this edition is entirely whimsical and doesn't come off as moralistic as earlier translations I've read do.  Oh, it hasn't been left out, but Pinocchio is such a rude, naughty boy that he needs to be taught a lesson and eventually even he knows when he is doing the wrong thing.  I highly recommend this translation, especially for reading aloud.
Labels: 1883 2010 children's books classics fantasy