Here is what my mailbox brought me last week:

Over the past four decades, the landmark NBC hit television series I Dream of Jeannie has delighted generations of audiences and inspired untold numbers of teenage crushes on its beautiful blond star, Barbara Eden. Part pristine Hollywood princess and part classic bombshell, with innocence, strength, and comedic talent to spare, Barbara finally lets Jeannie out of her bottle to tell her whole story.

Jeannie Out of the Bottle takes us behind the scenes of I Dream of Jeannie as well as Barbara’s dozens of other stage, movie, television, and live concert performances. We follow her from the hungry years when she was a struggling studio contract player at 20th Century Fox through difficult weeks trying to survive as a chorus girl at Ciro’s Sunset Strip supper club, from a stint as Johnny Carson’s sidekick on live TV to tangling on-screen and off with some of Hollywood’s most desirable leading men, including Elvis Presley, Clint Eastwood, Paul Newman, and Warren Beatty. From the ups and downs of her relationship with her Jeannie co-star Larry Hagman to a touching meeting with an exquisite and vulnerable Marilyn Monroe at the twilight of her career, readers join Barbara on a thrilling journey through her five decades in Hollywood.

But Barbara’s story is also an intimate and honest memoir of personal tragedy: a stillborn child with her first husband, Michael Ansara; a verbally abusive, drug-addicted second husband; the loss of her beloved mother; and the accidental heroin-induced death of her adult son, just months before his wedding. With candor and poignancy, Barbara reflects on the challenges she has faced, as well as the joys she has experienced and how she has maintained her humor, optimism, and inimitable Jeannie magic throughout the roller-coaster ride of a truly memorable life.

Irma Voth entangles love, longing and dark family secrets. The stifling, reclusive Mennonite life of nineteen-year-old Irma Voth - newly married and newly deserted and as unforgettable a character as Nomi Nickel in A Complicated Kindness - is irrevocably changed when a film crew moves in to make a movie about the community. She embraces the absurdity, creative passion and warmth of their world but her intractable and domineering father is determined to keep her from it at all costs. The confrontation between them sets her on an irrevocable path towards something that feels like freedom as she and her young sister, Aggie, wise beyond her teenage years, flee to the city, upheld only by their love for each other and their smart wit, even as they begin to understand the tragedy that has their family in its grip.

Irma Voth delves into the complicated factors that set us on the road to self-discovery and how we can sometimes find the strength to endure the really hard things that happen. And as Gustavo, a taxi driver, says, you go on, you live and you laugh and you are compassionate toward others. It also asks that most difficult of questions: How do we forgive? And most importantly, how do we forgive ourselves?

A bestselling author and prominent Catholic defends his faith.

Columnist, television host, author, and practicing Catholic Michael Coren examines four main aspects of Catholicism as they are encountered, understood, and more importantly, misunderstood, today. For some Catholicism is the only permanent, absolute body of truth, while for others it is the last permanent, absolute body that has to be opposed and stopped. Why Catholics Are Right opens with a discussion of the abuse scandal and the reality of what happened. Coren then traces Catholic history, with a discussion of the Crusades, Inquisition, Holocaust, and Galileo. He looks at Catholics and theology, explaining what and why Catholics believe what they do — Papal infallibility, immaculate conception, the Church rather than Bible alone. Finally, Coren outlines the pro-life position and why it is so important to Catholicism. In this challenging, provocative, and personal book, Michael Coren draws on history, politics, and theology to present the arguments for the truth of Roman Catholicism.

From Macmillan for Kids:

Having solved the matter of the Radiant Boy, Riley, Buttercup, and Bodhi are enjoying a well-deserved vacation. When Riley comes across a vicious black dog, against Bodhi’s advice, she decides to cross him over. While following the dog, she runs into a young ghost named Rebecca. Despite Rebecca’s sweet appearance, Riley soon learns she’s not at all what she seems. As the daughter of a former plantation owner, she is furious about being murdered during a slave revolt in 1733. Mired in her own anger, Rebecca is lashing out by keeping the ghosts who died along with her trapped in their worst memories. Can Riley help Rebecca forgive and forget without losing herself to her own nightmarish memories?

Purchased new from an online retailer:

The book that was the #1 reason for me placing this order didn't arrive with this shipment. I hate it when that happens.

The Story of a Soul conveys St Therese of Lisieux's Little Way of spiritual childhood-- her elevator to Heaven, as she called it. This method was approved by Pope Pius XI as a way of holiness for all, so we can grow in holiness through unfailing confidence and childlike delight in God's merciful love. Again and again in this book, St Therese shows us how Little Way of love and trust comes straight from Sacred Scripture. This book belongs in every Catholic home, for Pope St Pius X stated that St Therese of Lisieux is the greatest saint of modern times. 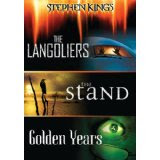 The Stand: Originally aired as a television mini-series, this all-star filmization of Stephen King's gripping epic of good versus evil chronicles the episodic adventures of a disparate group of people who struggle to reestablish civilization after a man-made catastrophe wipes out most of the world's population. The world abruptly ends when a deadly virus accidentally escapes from a government sponsored biological warfare laboratory. Soon people are dropping like flies from the plague, but a few survive and find themselves strangely compelled to head into the West. Good-hearted people follow the voice of an ancient black woman and head for Boulder, Colorado. Bad people follow the enigmatic Walkin' Dude to Las Vegas. It is only a matter of time before the two sides are forced into a climactic battle over the final fate of humanity. Golden Years: This made-for-TV mini-series from the notorious horror writer centers upon a hapless old janitor who begins undergoing incredible physical changes after he is accidentally covered with experimental chemicals following a laboratory mishap. Now the government will stop at nothing to get him back. The Langoliers: Ten passengers on a red-eye flight from L.A. to Boston discover that they are not the only people on the plane, but after making an emergency landing in Bangor, Maine, they discover that they are the only people on the planet. This film was based off the Stephen King short story Four Past Midnight.
Labels: books in the mail