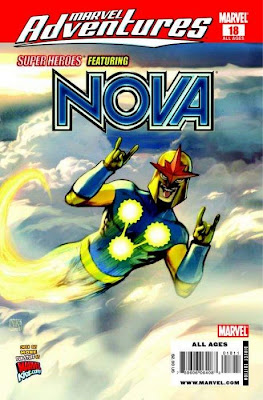 This is my son's and I read it last night as I didn't have anything else to post today. This comic is an All Ages, safe for kids title with an old-style feel to it. There is a group of Super Heroes working together: Captain America, Invisible Woman, Iron Man, The Vision and Thor. The only one I'm not familiar with is The Vision. A teenage Nova and his friends go to investigate a town that rumours say has gone mad but when they get there they find no such thing until they are attacked by a spriggan, a mischievous creature who likes to steal things and they say is the ghost of Old Giants. While looking around an old woman folklore expert's abandoned house the above super heroes arrive on the scene. Eventually Black Widow joins the scene and a battle with the spriggan becomes almost impossible to win as it can make all their superpowers malfunction. In the end both Nova and Black Widow are invited to join the super heroes and they decide to call themselves The Avengers.

I really enjoyed the old-style comic and story line plus the kid safe illustrations and text. An interesting story, with great camaraderie and joking/teasing between the team members with an added fun surprise ending. The book ends with this being a complete story in one issue and I'd definitely read more issues. (4/5)
Labels: comic books superheroes