The Bride Collector by Ted Dekker (Canada) - (US)

"Thank you, detective. We'll take it from here."

Acquired: Received a review copy from Hachette Book Group and agreed to participate in this Book Tour.

Reason for Reading: I loved my first Dekker book, The Boneman's Daughters, and *had* to read this. 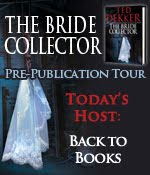 Summary: FBI special agent Brad Raines is called onto a case where women have been found posed and glued to the wall of abandoned barns, wearing a bridal veil and having the blood drained from them. The serial killer has been nicknamed The Bride Collector and things get personal when Raines finds a note taped to living room window of his high rise apartment. Raines' investigation takes him to an upscale rural psychiatric hospital that only treats those with high intelligence. It is here he meets Paradise a young woman who barely escaped from her father's murder of her family. Though a diagnosed schizophrenic Paradise has a talent that Brad is willing to enlist, when Paradise touches a dead body she sees the ghostly images of the deceased's last sights and sounds.

Comments: This was a thrilling, incredibly fast page-turning read for me. I had each page poised for turning at just the right moment so there would be no interruption in the flow of my reading. I loved this book. Two things in particular really grabbed me: one being the serial killer aspect, the other being the psychiatric angle. I have a special fascination for books that take place in psychiatric wards, hospitals or asylums and this aspect of the book was very well done. The patients were carefully chosen to suit this upscale hospital and were treated to learn how to focus on and express their intellectual or artistic "talents" with a minimum of medications. Whether there is any veracity to this method, does not really interest me to dig any deeper. However, I am deeply interested in exploring the high functioning intelligence of persons with mental disorders and I really enjoyed the motley crew of characters Dekker presented with various extreme disorders and while giving each full respect.

Brad Raines is an intense, likable, fully developed main character who carries his own dark psychological pain. Often in stand-alone thriller/mysteries characterization is thrown out the window in favour of plot but Dekker manages both equally well. Brad has a complete back story and range of emotions. He is a character the reader can relate to and feel for from the beginning.

The plot is top-notch thriller entertainment. A gruesome serial killer, driven by religious delusions is pure evil. The third person narrative switches back and forth from the investigation to the killer, making the identity of the killer known to the reader from the beginning and putting the emphasis on the detecting and the motives. There are many twists and shocks along the way, including a main character becoming a victim to the serial killer. Differently from The Boneman's Daughter, this book does contain quite a bit of Christian material. The killer is delusional and rants about his God given reason for the killings and at one point Brad uses this against the killer by theologically answering each of his statements. It becomes heady stuff, which I quite enjoyed but may not be to everyone's tastes. Dekker certainly does have a taste for the macabre when it comes to serial killers as evidenced by The Bride Collector and his previous book. I really enjoy that he hasn't fallen into the series trap yet and hope he brings us another standalone for his next thriller, which I anxiously await. In the meantime I have some of his more mainstream Christian Fiction to read.
Labels: book tour christian thriller