156. The Day the Falls Stood Still

The Day the Falls Stood Still by Cathy Marie Buchanan

The stone walls of Loretto Academy are so thick I can sit curled up on a windowsill, arms around the knees tucked beneath my chin.

Reason for Reading: The book takes place in Niagara Falls, Canada and that is where I live plus the historical time 1915-1923 is a favourite period I like to read about. I was excited to read a book set in my city and the cover is beautiful and actually blew me away when I saw it in real life. I received a review copy from Harper Collins Canada. Qualifies for the Canadian Reading Challenge.

Comments: I'll start off by admitting I may be a little biased. There is something captivating about reading a book when you recognize the street names, know the buildings mentioned, have been to the natural landmarks and live a block away from the church the family attended. But when I also find myself reading a brilliant epic love story I think my insider knowledge is more of a bonus than a bias.

Bess and Tom come from different classes. Bess is the 17yo daughter of an influential man at Niagara Power and lives in Glenview Mansion. She attends a Catholic Girls Academy (even though the family isn't Catholic) and leads a sheltered life. Tom is about 22 and is the local riverman. He catches fish for pay, pulls dead bodies out of the river, works a few nights in the saloon he has a room over and is always on hand when help is needed down at the river. When these two meet each other it is love at first sight but many things stand in their way including themselves.

While the beautiful love story is the main plot there are many other themes running through the book. The plight of women during this period is masterfully woven into the story with unwed pregnancy, suicide, women working during the war, and women being given the vote during WWI if they had a husband or son overseas. The effect the war had on the women as they stayed home and wondered if their husbands would ever come home and the plight of the men who did come home who were wounded beyond repair and others who had unseen wounds, those of the mind that don't heal so easily.

It is also a story of the environment as the whole history of the harnessing of the power of the Falls for electricity takes place during this time period. Sir Adam Beck, the government, the big business and everyone else it seems is so excited about more and more electricity at less cost that nobody seems to know what it is doing to the river itself, nobody but Tom that is, who knows the river like the back of his hand, and what he sees scares and saddens him. The characters all stand out wonderfully but it is Tom, a true hero, who captures your heart.

A riveting book. I could hardly put it down and read it very quickly. It is emotional; there is sadness. I almost cried at the end, with a lump in my throat, mad, for a moment, at this tragedy we call life. An astounding first novel! Ms. Buchanan is a talented writer with a future ahead of her. I will be interested to see where she goes with her next novel. Highly Recommended! This one is certainly going to make my top ten list this year. 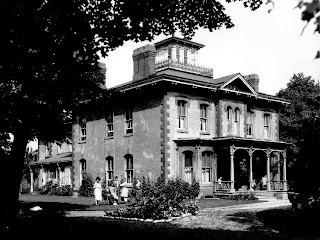 Glenview Mansion Later in the '80s 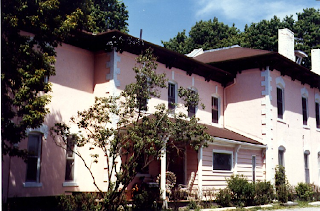 For a picture of it now visit the website where you can see it has been turned into executive tourist apartments. Blah! I wish it was turned into a museum the public could visit!