The pictures you are about to see are of people who were once actually alive.


Reason for Reading: In the book A Reliable Wife by Roderick Goodwin, the author mentions in a note that this book gave him the idea for the atmosphere to set his own book in. His characters read from the newspaper regularly and his description of this book made want to read it. So I put an ILL request in for it right away.

Comments: This is a very unusual book. It is a collection of both photographs and newspaper clippings from the period of 1895 to 1900 from a newspaper called the Badger State Banner which covered local Jackson County news as well as having access to state wide news. During this period, the author contends that a certain presence of death, and tragedy loomed over the agricultural towns of the American Midwest. What became a mundane part of their everyday lives as reported in the newspapers, now, to us looking back, seems to be a macabre era of history.

The newspaper articles which run from one-liners to several paragraphs report on suicides, diphtheria deaths, baby deaths, insane declarations, window smashers, arsonists, found dead bodies, deaths, funerals, charges of obscene letters sent through the mail and much more plus repeated instances of the same over and over with each one different and many the same. Suicides are rampant, men shooting themselves in the head, hanging themselves in the barn and one guy blew his head off with dynamite. Women poisoned themselves with the plenty of rodent killers found on the farm, drowned themselves in barrels and rivers or set themselves on fire, one lady in a bath of kerosene. The asylum must have been filled to the rafters with all the reports of committed people. How many times I read of women with 8 to 13 children being committed as insane with symptoms of despondency and men who lost their jobs and wouldn't do anything were declared insane. Of course then there were also the usual religious insanity, the tobacco insanity, the "thinks the neighbours are after him" insanity, too. All this and the other topics make for absolutely fascinating reading of a time when life must have been a hard road to travel.

Then along with the text between each year, are sections of photographs which were taken by a local studio photographer, Charley Van Schaick. It was the finding of the glass negative slides that prompted the compilation of this book. None of the photos are snapshots, they are all photos taken because someone wanted them taken. They are very striking and range from the morbid dead babies in coffins and old women who are scary to look at to studio shots of people but whose eyes are strangely lifeless and there are even some photos of picnics and local businesses. The way they have been arranged though is not just a sequence of photos but is an artistic presentation. I almost felt as if I were watching a silent movie at times.

The combination of the text and the photos together presents an unusual artistic viewing of social history in a manner not likely to be seen again. I think this is only something to come about from the mindset of the seventies. Both the preface and the authors ending thesis (this was originally presented as his thesis at Rutgers) suffer from a lot of seventies psycho-babble but the history presented is unblemished and fascinating ... and macabre. This is the type of book that would be a pleasure to own and dip into or just to come back to over and over for the pictures alone. While not for everyone I highly recommended it for those who, like me, enjoy this sort of thing.

Here are a few of the photos from the book: 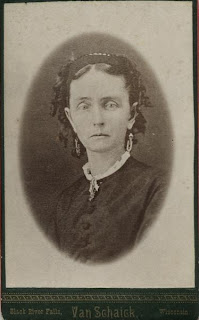 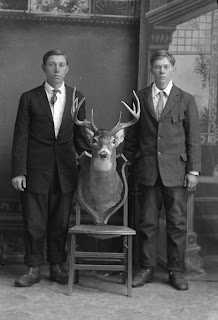 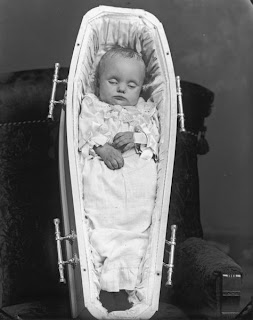